How Much Does It Cost to Develop a Flutter Mobile App? 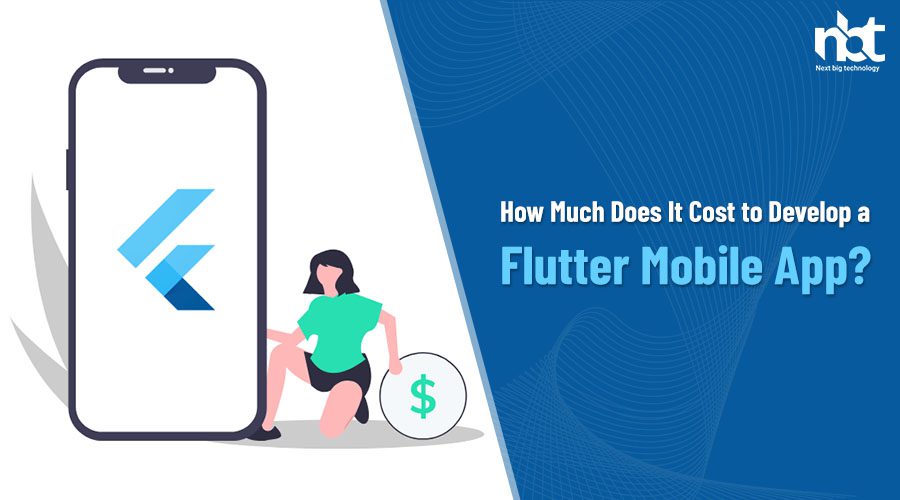 Cross-platform app development is quickly becoming the primary strategy of all the top mobile app development companies today, thanks to Google’s continued support and developers’ faith in the language.

Even so, making apps with Flutter is an interesting idea. In particular, how much it costs to make an app and what it can do for you.

Ok, so let’s get to the point.

What is Flutter when it comes to making apps?

Flutter is a technology that lets you make different programs for desktop, web, and mobile platforms from a single codebase. Google’s framework is a complete software development kit (SDK) that is better than what its competitors offer. Also, it came out a long time after its main competitor, React Native.

But how does making a Flutter app save money? Almost all clients usually ask this question. First, you can make two apps from a single codebase, which is more efficient than writing separate code for each platform. Many people think that shortly, Flutter will be the standard way to build apps that work on more than one platform.

Why Go with Flutter?

Flutter is not a collection of frameworks but a software development kit (SDK) (SDK). As a result, Flutter cuts down on the time it takes to make an app and gives you other benefits, like lower development costs and better overall performance. Find out what makes Flutter so popular and different from other frameworks.

The primary way the framework’s “hot reload” feature is used speeds up app development. This means that changes to the code only take a few milliseconds. Again, this lets app developers work quickly.

Flutter has an extensive library of widgets that developers can use to make native iOS and Android apps that have the same functionality. Since the widgets look and feel the same on all platforms that support them, it’s easy to make similar versions of your apps for each.

The User Interface, or UI,

Using Flutter to make an app is not a hard thing to do. The framework gives you a head start by giving you advanced programming tools and features that focus on design, scrolling, navigation, advanced APIs, and more. However, to make apps that look the same on iOS and Android, developers need to know how to use both frameworks well.

Statista found that after Angular, the second most-used framework by programmers was Flutter. If you look at the numbers, you can see that Flutter’s popularity has gone up from 30% to 39%, while React Native’s popularity has stayed the same at 42%.

Even though the Flutter framework was made available to the public much later than React Native, it has more than twice as many stars (96,000) on GitHub. The platform finally came out in December 2018, but because of the delay, it already had 2 million users by April 2020.

A Stack Overflow survey shows that 68.8% of developers like making mobile apps with Flutter and want to keep doing so.

How Different Things Affect the Total Cost of a Project

In the end, how much your app will cost depends on many different things. Here are some of the costs that directly affect your app’s cost in the end.

Every program has essential parts that are called “features.” Any potentially infinite number of features can make your app more useful. But the hard part is figuring out which of these factors are the most important and will significantly affect how much your software will cost in the end.

Here are a few parts of an application that have become very important:

Low-complexity apps can be made quickly and cheaply, while medium-complexity apps will take a little more work. For example, it costs less to make a simple app like a calculator or calendar than it does to make a complex app like one for e-commerce.

Whether or not your app has the following features will affect how hard it is to use:

“Application design” is the process of designing how your app works, not just how it looks and feels. Customers are more likely to buy something from a site that is easy to use and looks nice. A simple interface makes it easy for users to find what they need and move around.

The design of your app must meet or go above and beyond what your client asked for. Some common signs of design progress are:

If your program involves keeping track of client information, you should include the cost of server space in your evaluation. If you don’t plan, an overloaded server will slow down the way your app works.

Unreliable servers will also make it hard for people to use your app and make it harder to keep customers. So, it’s best to use a server host with a good name, like Amazon EC2. A typical server with an 8-core CPU and 32 GB of RAM costs about $1650 annually and is suitable for most businesses.

How hard apps are to use

This is one of the most important things to consider when figuring out how much an app will cost. It would be easy to make a simple app, but planning carefully before making a complex enterprise software would be essential. To find and hire highly skilled developers, you also need the help of a top app development company.

Cost of Making a Flutter App

Estimates of how much an app will cost are hard to make without first looking at the whole project. Another essential thing to think about is where the app will be made. In the US, an hour of development can cost anywhere from $150 to $250, but in India, it only costs between $30 and $70. The cost of making a Flutter app in India is estimated to be USD 5,000.

Do you want to make an app with Flutter? What do you think of this framework for making apps that work on several platforms? Please post a comment below to tell us what you think.

Thanks for reading our post “How Much Does It Cost to Develop a Flutter Mobile App?”, please connect with us for any further inquiry. We are Next Big Technology, a leading web & Mobile Application Development Company. We build high-quality applications to full fill all your business needs