Python may be used to create seven different types of applications. 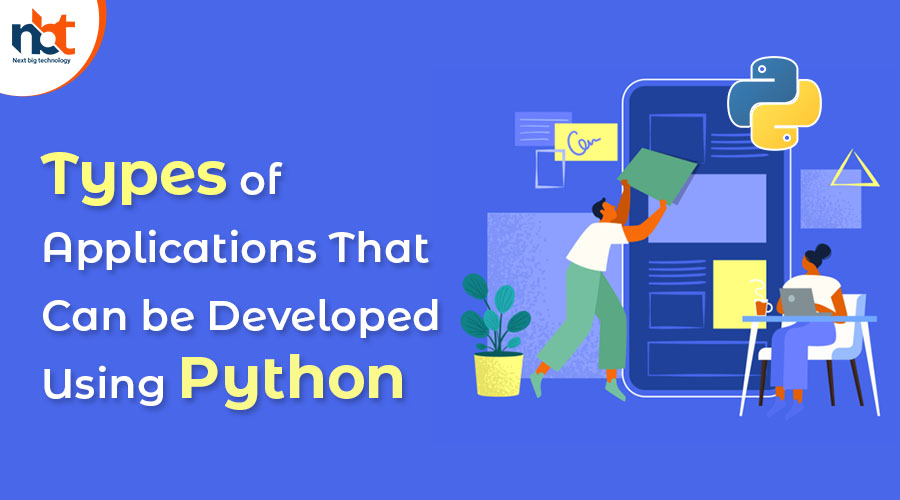 Your mobile app concept is fantastic, but you’re not sure what language to use to make it a million-dollar hit? Please, don’t worry about it! Your success is our goal. Our focus today is on the building of mobile apps in Python, which is an approach that is far from traditional.

It’s a general-purpose programming language that may be used to solve a wide range of issues. If it can manage most of the applications’ requirements, it is a good choice.

Python-based app development is quite popular among programmers. In fact, it was previously deemed the best programming language, even surpassing Java, the original coding language. It has significantly facilitated the entire mobile app development process, earning it the aforementioned moniker.

The cross-platform capabilities of Python for mobile app development increase the usability and flexibility of your product. A general review of the frameworks will be given, but we will not go into great detail. You can use these frameworks to break down the process of producing Python-based mobile apps.

What Kinds of Python Apps Can You Make?

Blockchain, as one of the most popular technological revolutions of this decade, has swept the market off its feet. Blockchain creation is not as simple as shelling peas, according to developers. Python programmes, on the other hand, have practically made it so. Developers can use HTTP requests to connect with their blockchain via the Internet and establish endpoints for different blockchain activities by using Python frameworks like Flask. Developers can also use Python to run scripts on multiple PCs, allowing them to create a decentralised network.

The same action can be done via the command line or on a console. It’s computer software with no graphical user interface that runs from the command line or shell. As a result of Python’s REPL capabilities, which allows programmers to evaluate the language and uncover new possibilities, it’s thought to be well-suited for these kinds of applications.

3. Applications for audio and video

Python-based apps are useful for making music and other audio and video applications.

Python may be used to analyse all of the audio and video content available on the internet. PyDub and OpenCV are two Python packages that aid in the effective completion of app development.

Python has been used in a number of popular games, including EVE Online and Battlefield 2. All add-ons and functions in Battlefield 2 and the majority of features in World of Tanks are implemented using Python. Panda 3D was used to construct Disney’s Pirates of the Caribbean game, which employs Python as its programming language.

System Administration programmes, to put it mildly, save management a lot of time and effort. Because it makes it simple for programmers to interact with the operating system, Python is an excellent choice for system management applications. Using it, Python programmers can communicate directly with the operating system. All IO operations, including simple file system reading and writing, can be performed using this language.

6. Applications based on machine learning

Is Python’s Popularity Due to These Apps?

Python is ranked third among the top 20 programming languages used by competent engineers around the world, according to the TIOBE Programming Community Index for July 2020. Python’s popularity stems from the fact that it benefits a wide range of programmes. As a result, we can conclude that the aforementioned applications contribute to Python’s popularity.

Here are some of the benefits.

Other Python Language Use Cases

1. Development of websites and software

Python’s code is basic and easy to grasp, which simplifies web and software development services and makes the process more efficient. Python’s interoperability with other languages is another appealing trait, making it a more versatile alternative.

Python’s object recognition and image processing capabilities are just astounding. When it comes to creating self-contained deep learning and Computer Vision apps using Python, there are a number of Python libraries to choose from. These include PyTesseract, TensorFlow and the Python Imaging Library (PIL).

3. Testing that is automated

Python is the language of choice when it comes to Automated Testing. Automated testing is the process of running a script instead of a human to test the app’s functionality. Python, in conjunction with Selenium (a web-based automation tool), offers a wide range of libraries and tools for automating testing. These tools, which stand for “Continuous Integration” and “Continuous Deployment,” can run tests, compile, and publish apps in addition to delivering them to production.

In the end, we can conclude that python app development is really fast and flexible. A wide number of applications can be built using Python’s programming flexibility. Businesses prefer Python-based apps over those created in other languages since there are a wide variety of libraries to select from.