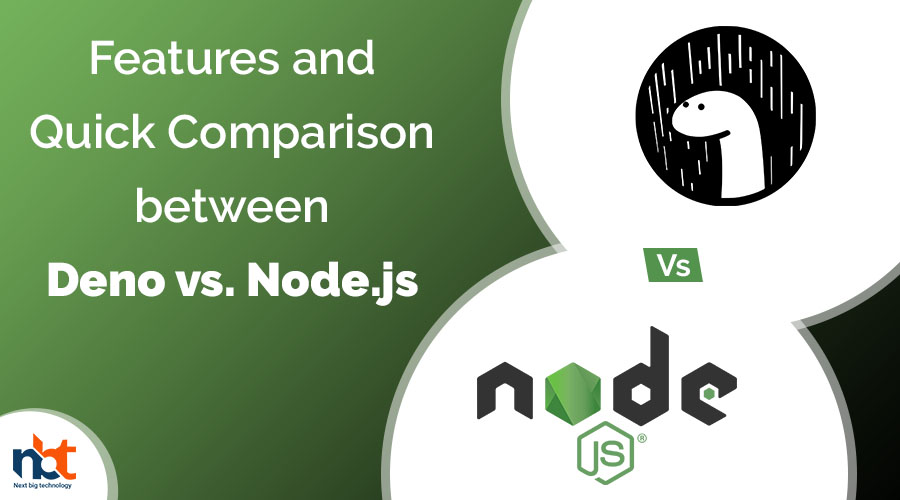 Deno v1’s recent release has generated a lot of interest. Several people believe Deno will be the end of Node.js. Is Deno more efficient than Node? However, it appears to be an exaggeration or an over-emphatic statement at this time. It’s inevitable that Deno and Node.js will be compared. After all, Ryan Dahl, the author of both Deno and Node.js, is the same person.

Partner with a Node.js application development business if you want to learn more about the differences or decide whether to go with Node.js.

Deno is a JavaScript and TypeScript runtime that is built on the Rust programming language and the V8 JavaScript engine. Deno is currently in alpha testing mode.

Node.js provides smooth access to the filesystem, outgoing requests, environment variables, and other resources. While having such access is a privilege, there is also a disadvantage. During the development or coding process, this uncontrolled access brings up a world of dangers.

Deno will not be able to delete files from your software without your permission unless otherwise mentioned. Deno’s main concern is security. Without authorization, it won’t be able to access the hard disc or carry out any potentially dangerous acts.

Also Read : A Complete Guide to the Comparison Between Node.JS & PHP

Have you ever considered rising above the noise? npm is a package manager provided by Node.js. Deno, on the other hand, allows you to install or use packages directly from the URL by importing them as a library in the script. The ‘package.json’ file for managing dependencies, as well as the ‘node modules’ subdirectory, are no longer required.

This is one of Deno’s most significant advantages. How does Deno, on the other hand, deal with dependencies? It is simple since it allows you to request modules from any location.

There’s no need for a separate centralized repository. This is one of the most significant differences; yet, it is also one of the most contentious, because importing modules from third-party sources increases vulnerability.

JavaScript has been evolving and improving its library since the first version of Node was released. Deno, on the other hand, makes bold claims about having a full standard library that allows developers to use official tools for simple functions and external libraries for more complicated ones.

Since the inception of Node.js, the standard for JavaScript modules has been CommonJS, which is supported by npm. Since then, the ECMAScript committee has defined a new standard called ES Modules, which jspm now supports.

ES Modules are supported by Deno.

CommonJS modules, both standard and third-party, are loaded using the required keyword in Node.js and come implicitly from npmjs.com. You load ES modules in Deno by using the import keyword and specifying the URL explicitly.

In the absence of a centralized repository for third-party modules, Deno modules can be hosted anywhere, as well as cached and compiled locally, which means they are not updated unless asked for clarification.

This simply means that you can run Deno apps on your laptop with all imports already installed (needs to be resolved once).

Node.js, according to Dahl, the founder of Node.js and the designer of both Node.js and Deno, has minimal design flaws. Deno solves all three issues. In particular, these issues were brought up:

The following are the main points raised: Performance comparisons between Deno and NodeJavaScript developers

Will Node.js be replaced by Deno? Is Deno more efficient than Node?

Perhaps, or perhaps not. The Node.js programming language has a big and active development community. Deno, on the other hand, is still in its infancy and will take some time to catch up.

Deno is now a nice new platform for creating small private TypeScript scripting projects. Deno, according to Dahl, will never be able to compete with Node.js in terms of popularity. Deno, on the other hand, may become a viable option for larger projects as it evolves.

Is Deno a better option than Node.js?

Deno’s goal here is to serve as an option to Node rather than a replacement. The majority of Node.js developers are pleased with the way the language has evolved and do not wish to change anything. Deno has the potential to become a go-to tool for JavaScript developers because of its focus on security and the ability to generate a whole codebase in a single file. It also includes the production of utility scripts, which may be written in languages such as Python or Bash.

Also Read : What Is Node.JS & Why Should You Use it for Enterprise App Development?

In node, which is faster. What is the difference between js and deno?

Deno outperforms node.js in the c100 test, implying that Deno performs well in higher-traffic networks. Python and PHP, on the other hand, are slower than deno and node.

Deno is a framework, right?

Deno is a new framework, and many others are underdeveloped to the point where they can’t support automatic code generation, Open API integration, contract-driven development, validation methods, and other features.

Deno, a new implementation, is a revolutionary runtime that executes JavaScript and TypeScript, both of which are now available inside the web browser. Deno isn’t a Node extension, so keep that in mind. Deno’s popularity is growing, same like Node’s.

Explain what NodeJS is for.

What is the purpose of Hidden Brains?

Hidden Brains has long been a leader in the mobile and web applications development. We not only design attractive and result-driven solutions but also mobile and web solutions that have an aesthetic appeal to the user, thanks to our years of experience and skill. We recognize that every organization has its own set of goals and requirements, so we create tailored solutions to meet all of your demands.

Only time will tell if Deno will respond. Node.js is the way to go right now or in the near future, and as Ryan puts it, “Node isn’t going anywhere.” When we compare Deno to node.js, we see that the former is a more fascinating project. Its stable version is currently accessible on the market, and more will be released in the future.

For example, the developers are aiming to improve the efficiency of the TypeScript compiler. In the next months, you’ll be able to see them. The combination of ideas like TypeScript and its browser-compatible modules is what makes Deno a go-to technology.

Thanks for reading our post “Deno vs. Node.js Features & Quick Comparison”, please connect with us for any further inquiry. We are Next Big Technology, a leading web & Mobile Application Development Company. We build high-quality applications to full fill all your business needs.