AWS vs Azure vs Google Cloud: What’s the Best Cloud Platform for Enterprise? 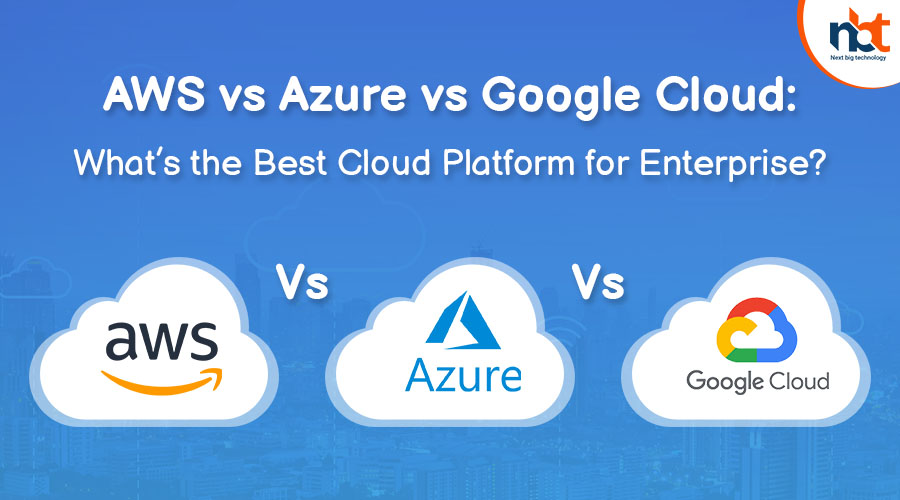 The choices include Google Cloud, AWS, and Azure and these three are considered as the top three cloud providers in the online market. But the main question is how to decide which one is perfect for your requirement. You don’t need to worry about much as we have covered up every detail on the comparison between these three cloud computing services.

Before choosing any cloud computing platform various factors need to be compared between these three on proper understanding.

Amazon Web Services is the subsidiary brand of Amazon.com which will offer an on-demand cloud computing platform. The service is available for the government, individuals, and companies. The entire service can be obtained using the paid subscription basis service. Amazon Web service is one of them experienced and oldest cloud marketing platforms. It is one of the most established and large userbase cloud computing platforms due to reliability and trust factors for the consumers.

Amazon Web Services was launched in the year 2006 to offer various services such as Simple Storage Service (Amazon S3), Elastic Compute Cloud (EC2), etc publicly. In the year of 2009, they launched the Elastic Block Store (EBS) store was available for the public, and various other services were launched including Amazon Cloud Front, Content Delivery Network (CDN), etc. AWS cloud computing service offerings have increased and evolved throughout time.

Also read : AWS Vs Azure Vs Google Cloud: Which One Is Best for You?

Microsoft Azure which is commonly known as Azure was introduced into the online world in the year of 2010. The major concern and objective are to offer the most competent cloud computing platform for business. Azure initially renamed its brand in the year of 2014 to Microsoft Azure. After its launch, it has shown the most potential and increased in progressing among the other competitors available in the online market.

Google Cloud Platform is introduced by Google to offer the best cloud computing services which will be running the same infrastructure as Google. It uses the internal end-user product which includes YouTube, Google search engine, etc. Google cloud platform was released in the year 2011 and it has managed to get cloud reliability and trustworthiness for the business customers.

One of the basic objectives of the release of the Google cloud platform is to provide proper security and strength to their product which is Google search engine and YouTube. With the success, they have launched their enterprise service which allows anyone to get Google cloud platform using the same infrastructure such as YouTube and Google search.

As per the report on the quarterly earnings for the year 2021, it is confirmed that Microsoft Azure cloud service revenue is to be far more than other cloud services. Once again it seems to be outperforming other cloud platform services like Google Cloud and AWS. Amazon web services is having large investments and huge stature compared to other cloud computing services.

Due to the proper service and reliability, Microsoft Azure cloud has outperformed all of the other competitors by revenue generation of $17.7 billion. And our revenue generation of Microsoft Azure is increased by 50% compared to the previous quarter. It is being confirmed by the fiscal earnings report which is being done on various commercial cloud revenue income calculations.

Users of the Cloud Computing Platform:

Amazon Web Services is one of the oldest cloud computing services in the online market. It is having the largest user base and community support compared to other cloud computing platforms. This is the main reason for having well-known customers such as BMW, Netflix, MI, Airbnb, Zynga, Unilever, Samsung, etc.

Microsoft Azure is also having great engagement with high-profile clients with their proper cloud computing services. One of the most important things is that more than 80% of the Fortune 500 companies are using the Microsoft Azure cloud computing platform. Most of their well-known customers are HP, Johnson Controls, apple, Polycom, Fujifilm, Honeywell, etc.

One of the most important they are using a similar infrastructure which is being used by YouTube and Google search engine. This is one of the major reasons for the engagement of high-profile companies to have reliability trust with the Google cloud platform. A few of the major clients of Google cloud platforms are Domino’s, HSBC, Bloomberg, 20th Century Fox, PayPal, etc.

We need to properly understand that each of these cloud providers is not unique and different cloud computing services are being required by all the basic businesses. The only difference between these cloud platforms is the user base and the revenue generation but they are much similar in every other way.

Various services are being offered by all of the three cloud computing giants. You need to understand that various components would be particularly added to the platforms. Such as Amazon Web Services will be offering more than 200 services, similarly Microsoft Azure will be offering more than 100 services. Comparison Google cloud is catching up with other cloud computing services by offering 60 services for their customers. Each of these service offerings by Amazon Web Services, Google cloud platform, Microsoft Azure are divided into storage, database, domains, networking, etc.

Thanks for reading our post “AWS vs Azure vs Google Cloud: What’s the Best Cloud Platform for Enterprise?”, please connect with us for any further inquiry. We are Next Big Technology, a leading web & Mobile Application Development Company. We build high-quality applications to full fill all your business needs.