Top Technologies and Languages to Pick for Building Microservices Architecture 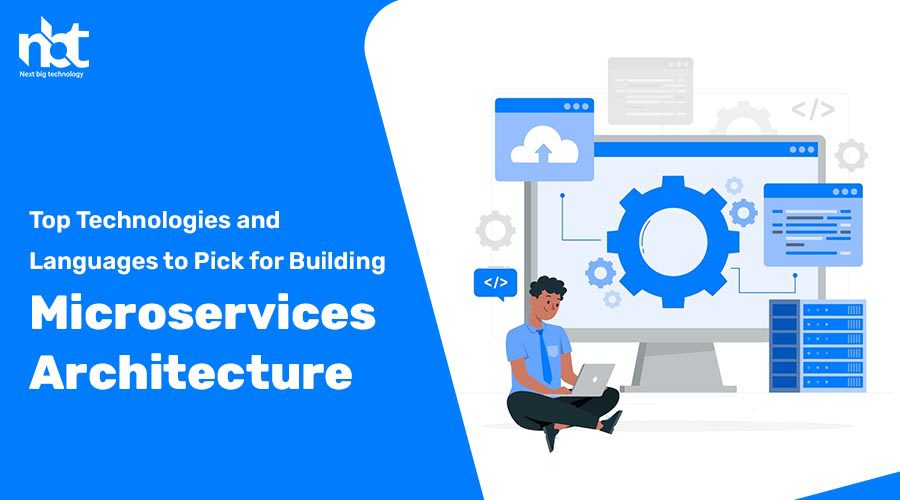 Businesses are making more and more apps that are bigger, have more features and can be used for more than one thing. So, microservices are getting a lot of attention. O’Reilly did a survey and found that 61% of companies have been using microservices for at least a year.

Microservices are becoming increasingly popular, which raises the question, “What languages and technologies are used to build microservices architecture?”

Some tools make it easier to build microservice architectures.

Many languages, libraries, and software versions can be used to build microservices. Let’s learn more about the tools that make it possible to use microservices.

One way to do this is with Docker, which makes it easier to make, test, and use software by putting it in its container. Kubernetes is also a platform that makes automating the processes of deploying and managing containerized applications easier. It helps manage containers by doing things like scheduling, scaling, etc.

By using these technologies together, a flexible environment for microservices architecture can be made. You can easily make it bigger or smaller to fit your needs.

Representational State Transfer (REST) is a protocol that makes it easier for different software parts to talk to each other (microservices).

This architectural paradigm makes it easier for microservices to talk to each other directly over HTTP. Moreover, it deals with requests and answers in standard formats like JSON, HTML, and XML.

Prometheus is a system for monitoring and sending alerts all in one. It is made for large, complex app topologies. This program has a data store and the ability to scrape data. It works with multidimensional data by using key-value labels. The simple but powerful program Prometheus can quickly sort data based on their titles.

Prometheus is the best software to use if you want an excellent dashboard for keeping an eye on data and getting alerts. It allows for the collection of data, the presentation of that data, and the selection of different tracking options based on time. All of these things help find strange patterns quickly. In addition, it’s a powerful monitoring app with a dashboard that’s easy to use and several essential graphing tools.

Redis is a powerful and flexible technology that can be used in many different ways because it can do many other things. This NoSQL database is fast and doesn’t make mistakes. It lets you create dynamic data structures and get immediate answers to complex coding problems with simple commands. In addition to its primary data format, Redis can handle a wide range of data types, such as Streams and Hashes.

Platforms that use Redis perform exceptionally well. The system can read operations in less than a millisecond and handle millions of operations per second. It also has a nice feature called a distributed caching engine. It talks about keeping data safe, moving it between microservices, and storing secure interim data.

Consul is a technology that makes it easier for microservices to talk to each other. It stands out from other service discovery tools because it can do things others can’t. In addition, a consul can be used with many different systems because it has a Template and a DNS interface.

This reliable message technology supports both pub/sub messaging patterns and message queuing, as well as different protocols that are always the same. Most developers see RabbitMQ as a unique message broker. When SSL is set up with RabbitMQ, it adds an extra layer of security.

Compared to other message brokers, RabbitMQ has a broader range of functions. It works quickly, can handle more than 500,000 messages per second, and does an excellent job of clustering.

Which languages are best for making microservices?

This high-level programming language works well with other systems and makes it easy to combine them. Python stands out from other languages and frameworks in prototyping because it can do it quickly and easily. To put it another way, programmers should choose this.

Google showed off the game Go in 2009. Because of its domain name, this language has become known by the name “Golang.” Golang is a favorite among developers who work with microservices architecture because it supports APIs and can run multiple tasks at once. In addition, its multi-device concurrency feature, which increases productivity, is a plus.

Node.js has proven to be a valuable platform for startups and large companies that have wanted to use a microservices architecture in the past few years. Because it is built on the V8 runtime. Businesses use Node.js microservices because they have many benefits, such as better performance, lower costs, more productivity, and happy developers.

Java is a popular programming language because it works well, is easy to learn, and has a lot of support. Java is the best programming language for making microservices architecture. Because it is easy to use annotation syntax, it’s easy to make a microservices architecture. Java is also a great choice because it has a user interface, lets you connect to back-end resources, and has model components.

The fact that.NET Core works on multiple platforms is a big plus for microservices. By doing this, you can use a language that has been around for a long time, is widely used, and is kept up to date by Microsoft. In addition, it makes it easier to make microservices because it has Docker containers built in. You can use the.NET Docker images on Docker Hub to build your

C++ is a high-level programming language that is flexible, fast, efficient, and hard to understand. It is essential for home electronics, robots, car software, and services that store and retrieve data. The C++ microservices library has a perfect service registry. It uses the service layer, which is what the OSGi R4.2 specification says. C++ microservices are used by REST SDK, which is a cross-platform library.

A microservices architecture should be used right from the start. But it might be hard to choose the right technology and language for your microservices. The technology you use depends entirely on the tool you use to build the different parts of your project. The skills of the people on your team are also critical.

Thanks for reading our post “Top Technologies and Languages to Pick for Building Microservices Architecture”, please connect with us for any further inquiry. We are Next Big Technology, a leading web & Mobile Application Development Company. We build high-quality applications to full fill all your business needs.