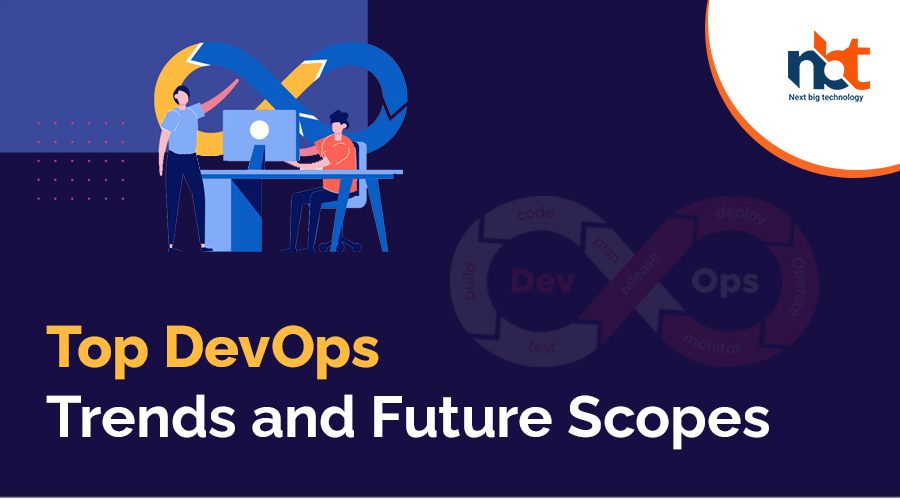 DevOps’s future is exciting and looks good. DevOps techniques are used more and more in the real world every day. If you learn more about many DevOps developers, you might be able to make your mobile app development faster and better. We might see some significant changes in the next few years. Internal processes need to be as efficient as possible to stay ahead of the competition.

Grand View Research says that by 2025, the global DevOps market will have grown to $12.85 billion. These numbers show how many people use cloud computing, how popular agile methods are, and how businesses are moving toward digitalization to automate administrative tasks.

This blog will look at how DevOps could be used in different IT fields and what the future holds for the field. But first, we need to figure out what DevOps is.

Can you tell me about DevOps?

At its most basic level, DevOps combines software development and IT operations, which have always been separate fields. When a company uses DevOps, the whole pipeline gets more attention, making the team more efficient and productive.

This is important because mobile app development depends so much on your team’s ability to respond quickly to customer needs and make changes to your apps that are both useful and smart. Apps are also becoming a much more critical part of business operations.

The future of DevOps is almost the same as the future of the company as a whole. Even though it is impossible to know exactly how this approach will change in the future, we can expect a few trends in how DevOps will be built in the coming years.

DevOps is the ongoing, professional collaboration between software developers and IT staff. Now that we know what it is let’s talk about where this quickly growing field might be going.

The use of serverless computing is growing quickly

Microservices-based architecture has grown at a fantastic rate.

DevOps teams don’t have to scale an entire app at once. Instead, they can scale each microservice based on what the business needs.

Microservices architecture also makes it easy to fix a problem without affecting the rest of the app. Microservices break up information into smaller pieces that are easier to handle.

Kubernetes is a big topic of conversation in the year 2022.

Kubernetes, or K8s for short, is a type of software for microservices that makes it easier to manage containers. Most companies use it as their primary way to handle software delivery, making it more and more popular in recent years.

DevSecOps will be widely used by 2022.

DevSecOps has become very popular very quickly in 2022. One of the main reasons is that it puts a lot of emphasis on security. DevSecOps is better than the standard DevOps method because it builds strong security measures from the start.

DevSecOps has given you an agile security network that will address security concerns and integrate new technologies to stop any possible threats, such as attacks, malware attacks, and security breaches that cause problems on today’s many networks.

GitOps is another relatively new part of the DevOps movement. It helps automate and manage infrastructure.

Thanks to DevOps, data scientists can retool production models while testing models that have already been made. As data scientists and custom app development teams manage many apps, the trend will become more and more popular.

What AI and ML have to do with DevOps

The software development life cycle is affected in a big way by DevOps, Microservices, and a cloud-native approach. DevOps brings together the development and testing environments so that bugs can be found before a programme is released.

Try adding Machine Learning and Artificial Intelligence to your DevOps pipelines to make your automation processes run better. People are moving away from DevOps and toward AIOps and DataOps, which use machine learning (ML) and artificial intelligence (AI) to learn from logs and check metrics to drive DevOps in a controlled way.

AI is making it easier for DevOps to grow, which is good for the operations team, the development team, and the DevOps engineer.

Our goal is to automate

DevOps is becoming the norm for a lot of companies. DevOps should be a crucial part of your business strategy if you want to speed up your company’s time to market, respond quickly to customer needs, and update your software solutions often.

Implementing automation in a DevOps framework intelligently makes it possible to keep improving the DevOps architecture while developers keep serving content to users. Automation is a big part of the future of DevOps.

As the sector grows, more DevOps automation solutions will likely become available. Here, developers will need to use their knowledge to figure out which parts can be automated and which ones need the help of an engineer.

Getting ready to support more than one cloud

Because app development tools are getting more complicated and the time between making an app and putting it into use is getting longer, cloud computing is quickly becoming a must-have for any serious app developer. Because of this, having a DevOps channel is more critical than ever.

Container technology is getting better and being used more and more quickly. Developers can use containers in many ways, each of which has benefits. Also, applications can be tested in a sandbox with containers to use fewer resources and make them safer.

DevOps has a bright future, and more and more businesses will start to use it. DevOps practices are changing because of the use of new, cutting-edge tools. This blog post should have talked about where DevOps is now, what it could be used for in the future, and how it will change the IT industry in a big way.

Thanks for reading our post “Top DevOps Trends and Future Scopes”, please connect with us for any further inquiry. We are Next Big Technology, a leading web & Mobile Application Development Company. We build high-quality applications to full fill all your business needs.