Which is better for app development: Angular or AngularJS? 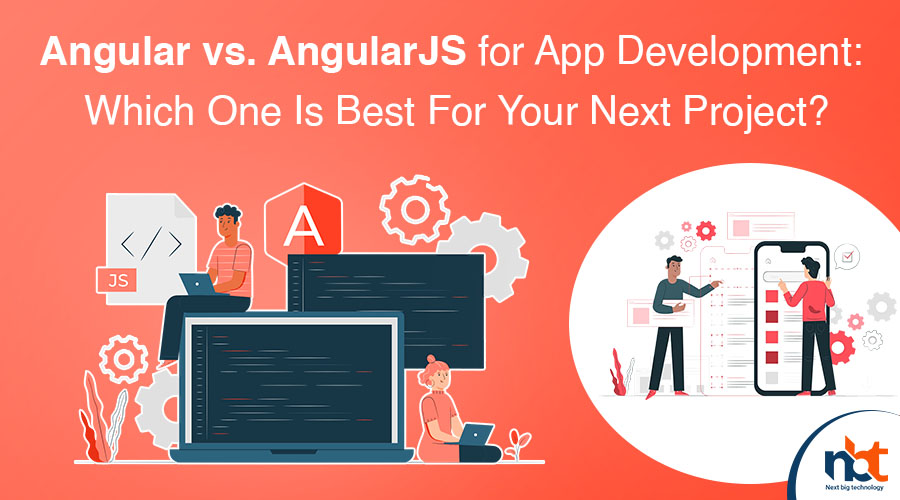 A version of AngularJS was released in 2010, and a fully new version was released in 2016. This Google product is always evolving and becoming more useful. It continues to draw in techies and is consistently ranked as one of the most talked-about subjects on the internet. As a result of Angular’s remarkable capability, potential, and simplicity, a wide range of apps and websites are being produced with it. Today, we’ve put together this piece, which includes an introduction to Angular and AngularJS, as well as information on their components, directives they employ, distinctions between them, and their advantages. After reading this article, you will be able to make an informed decision about which framework is best for developing your websites or mobile applications.

What exactly is AngularJS?

AngularJs is a JavaScript-based, open-source front-end framework that is mostly used to develop single-page web applications (SPAs). It is a framework that is always evolving and growing, and it provides improved methods for constructing online applications. It converts static HTML into dynamic HTML and vice versa. Additionally, it has capabilities such as dependency injection and dynamic binding, which reduce the amount of code that needs to be written.

AngularJS is rapidly expanding, which is why there are numerous AngularJS versions available. It is important to understand that AngularJs are not the same as Angular. AngularJS is an open-source project that anyone can contribute to and modify at their discretion. Directives are used to enhance the capabilities of HTML attributes, whereas HTML is used to secure data.

What Exactly Is Angular?

It is a widely used open-source Typescript framework developed by Google for the development of online applications. The usage of frameworks, such as React or Angular, allows front-end developers to manipulate and present data more efficiently. The revised version of Angular is more efficient than the previous version, particularly in terms of its fundamental functionality, which has been separated into separate modules. As a result, we notice increased smoothness and quickness when interacting with this framework. The newest version has an angular command-line interface (CLI). With the help of this package, you may create the foundation of your Angular project.

When one framework is built on TypeScript and the other is based on JavaScript, the differences between their components are immediately apparent.

The Difference in the Use of Directives Between Angular and AngularJS

Angular and AngularJS both make use of directives, however, the way in which they are used differs between the two frameworks. Directives in Angular are standard, whereas those in AngularJS are provided as part of the package. When working with the Directives, you must exercise caution.

For example, if you want to create two-way binding with AngularJS, you must utilize the ng-model to accomplish this. ng-bind is a one-way binding function that can be used.

Comparison of AngularJS and its counterpart, Angular.

Angular and AngularJS are both powerful frameworks, but each has its own set of advantages and disadvantages. Consider some of the contrasts between these two frameworks in the following section. It will assist you in emerging with the appropriate tools to satisfy your requirements.

1. Architecture is the first point to mention.

Angular JS is a type of programming language.

This framework includes a model-view-controller (MVC) that acts as a primary component, managing data, rules, and logic and dictating how the apps should respond in certain situations.

It serves as a data storage facility for the complete data management system.

View: After going over the details in the model, it delivers results for the user.

After receiving input, the controller transforms it into commands and transmits them to the view and the model, which are then displayed on the screen

It makes use of the directives and components that are included in the templates. There are two different sorts of directives in Angular.

Directives pertaining to the structure

The layout of the DOM is altered as a result of their replacement of its elements.

Attributive directives change the way the Document Object Model (DOM) behaves as well as the appearance of the element.

It is not supported by mobile browsers.

All of the major mobile browsers are compatible with this feature.

3. The ability to perform and move quickly

The two-way binding function reduces the amount of time and effort required for the development.

It has been upgraded to a new structure that delivers faster and with greater performance.

Also Read : List Of Latest AngularJS Development Tools That You Need to Know

4. Support for the Tool

This framework is reliant on third-party technologies such as WebStorm and the IDE.

It reduces the amount of time required for application development by utilizing the Command Line Interface (CLI).

JavaScript was used to create this document.

Routing setup is accomplished through the use of $routeprovider.when().

Routing setup is handled via the @Route Config(…) function.

7. The Syntax of Expressions

A developer should keep the correct ng directive in mind while binding a property/image or an event to a variable.

There is no use of dependency injection in this case.

The system makes use of a hierarchical dependency injection mechanism with unidirectional free-based change detection to identify changes.

It is more difficult to use than Angular.

Larger apps are simpler to build, structure, and maintain.

It does not have its own command-line interface.

Angular 2+ comes pre-installed with their CLI, which stands for Command Line Interface. It is the most effective method for producing components, providing services, and even assisting in the completion of projects swiftly and efficiently. With dynamic type checking, linting, and other features, you may simply build various versions of the same project for different platforms.

Angular JS has a number of advantages over Angular.

Angular and Angular JS has a number of advantages over other frameworks. Let’s take a look at a few examples of how much it would be beneficial to have these.

Aspects of angular geometry that are advantageous

Which framework should you use: Angular or AngularJS?

Both Angular and AngularJS have a number of advantages over one another. Google maintains both frameworks flawlessly, and as a result, it enjoys widespread community support. Angular is favored by the AngularJS developers due to its ability to create dynamic applications for mobile and web platforms as well as single-page applications using HTML and TypeScript.

Let’s have a look at a couple of the most popular Angular websites.

For example, Forbes, one of the most popular Angular websites, is built with Angular 5. Forbes replies to more than 74 million monthly readers in the United States. It includes a wide range of subjects and demonstrations.

2. PayPal, which is an online payment service provider

PayPal is the most straightforward and efficient method of transferring money over the internet. It also looks and functions wonderfully. Once again, Angular deserves all of the credit.

PayPal is a service that makes it easier to transfer money between businesses and individuals. On this platform, there are over 205 million or more active users. It features excellent website performance and the ability to handle large amounts of traffic. It strengthens the brand’s position as one of the most prominent online payment service providers.

Also Read : React Vs. Angular: Which JavaScript Framework Is Best to Choose In 2021?

3 Gmail – This is an email service provider

Gmail is the most effective service for demonstrating the capabilities of AngularJS on the web. This website sets the high-performance standards for other websites to strive to meet with its uninterrupted experience and straightforward UI. These are the functionalities available in Gmail. Angular is used by approximately 1.5+ billion people worldwide, which is a compelling argument to choose when developing a fantastic user-oriented application.

The JetBlue website, which is a low-cost American airline, was designed using the Angular framework. The company’s website and mobile application are both capable of handling huge traffic volumes and providing a superb user interface to a large number of visitors on a daily basis. There are numerous features on the company’s website that allow you to research destinations, order tickets, access the “flight tracker,” check road maps, and much more.

Lior Grossman, the founder of Wikiwand, expressed his thoughts on the subject. The Wikiwand software wrapper for Wikipedia articles, written with Angular as an example, is a result of this approach.

Wikiwand, a brand-new solution that can be placed on your browser, will provide you with a more comfortable way to interact with Wikipedia.

One of the Angular apps, Upwork, is a service that connects companies across the world with freelance specialists who can help them with any assignment. Furthermore, specialists from a variety of different nations might obtain full-time or part-time work on a freelance basis in their field. Both groups of consumers will appreciate the service’s great functionality, data security, and user-friendly design.

The greatest method to demonstrate how well Angular may perform is to utilize it on the Weather.com website, which is the most popular website in the world. All of the information you could possibly want is right here: the weather prediction, interesting facts, connected news, and entertainment stuff.

In terms of developing solutions of varying complexity, the Angular framework is the most appropriate choice. It doesn’t matter if you’re building a web store, a small messaging app, a news app, or an eCommerce site; Angular is the ideal framework for front-end development.

An Angular website will be able to handle large amounts of traffic and deliver the necessary performance. Furthermore, it has been shown to be ideal for the construction of PWAs and SPAs. Furthermore, Angular makes the app development process more manageable, and it will assist you in boosting your company’s revenue by providing a customer-oriented and simple-to-use application.

Thanks for reading our post “Which is better for app development: Angular or AngularJS?”, please connect with us for any further inquiries. We are Next Big Technology, a leading web & Mobile Application Development Company. We build high-quality applications to full fill all your business needs.