Is Flutter the Right Solution for Mobile App Start-ups? 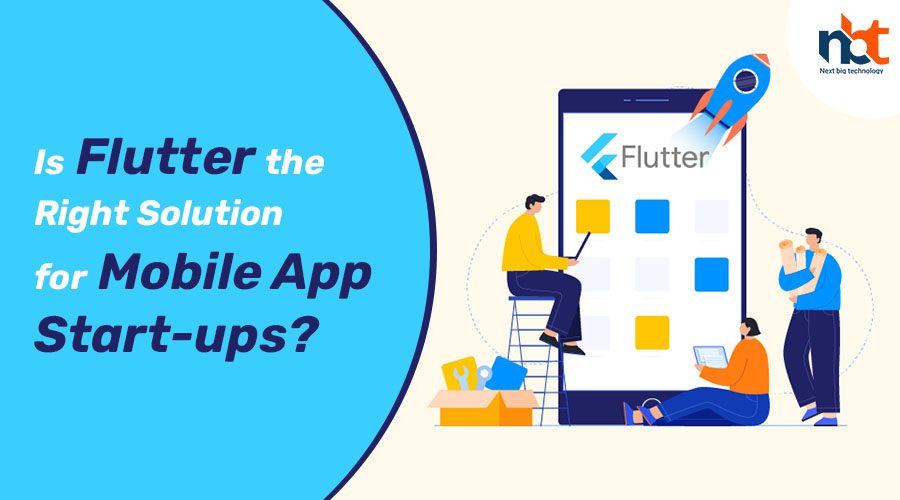 Flutter has been mentioned as one of the best tech platforms in recent years, leading a revolution in the world of businesses.

This Google-backed platform gives you the tools you need to make great apps for mobile devices.

Flutter, a platform with many features built on Google’s Dart language, can be used as a solid base for making mobile apps.

Why using Flutter to make apps is a good idea.

Flutter’s features and abilities are some of the best reasons companies and app developers use it. First, let’s run down Flutter’s most notable advantages:

If applications are simple and easy to understand, there will be less need to build them, and less money will be spent on them.

Compared to developing native applications, which require a separate program for each platform, the cost of making cross-platform software can be much lower.

Also, developers can work on the Flutter platform’s pre-made tools and code libraries, which makes the task even more efficient and productive.

Flutter is built around a single codebase, as was already said. Flutter makes it easy to create apps by providing programmers with ready-made code libraries and a large community of programmers to work with.

So, the platform is easy to use and takes less time for programmers to work on. In addition, Google’s design tools and frameworks have made it much easier to work on, so it can compete with any other option.

So, apps made with Flutter can be made faster, and their creators can keep working the whole time efficiently.

Because development cycles are getting shorter, developers can finish their work faster and better.

Adding this feature speeds up the time it takes to get an app to market and gives business owners a good balance in terms of time to market.

Even though the platform has many great features and cool things that help set up a great app, there are still a few things to consider before moving forward with the app development process.

Flutter apps may be weak and incompatible and run slowly because they use a code interpreter instead of built-in code. This means they may not give users the smooth and responsive experience they want. In addition, due to the use of widgets and buttons that have already been made, the layout of these programs would be very different from that of native applications, especially for mobile platforms like Android and iOS.

Because the Flutter platform is still relatively new, many businesses are wary of or put off making Flutter apps. A flutter is a new option that is not used as often as other choices.

Still, it is backed by well-known, trustworthy companies. After this, time will undoubtedly play a significant role in how well the project goes.

Flutter has been used to do many well-known projects, such as those from Alibaba, Tencent, and the Hamilton musical.

Because of this, the platform’s trustworthiness and credibility have gone up a lot, and any doubts about its ability to compete in the cutting-edge technology sector have been put to rest.

Flutter can help new and growing businesses in several ways. Among others:

Cross-Platform Development: How to Get Around Problems

Flutter is a new ray of hope that could give Cross-Platform products a new way of working and thinking. It considers the biggest problems React Native and Ionic have had, such as user experience and performance.

Flutter seems to be the best way for mobile app startups and new businesses to bridge the gap between native app development and cross-platform development. In addition, this will improve the user experience in ways that weren’t possible before.

Keeping an entrepreneurial spirit alive is based on a culture of taking the initiative and getting things done. But, unfortunately, growing production in both areas is one of the hardest things for new businesses.

When a business is just starting, finding a good balance between increasing and keeping up with maintenance can be hard. This can make it hard for the founders to get work done.

The Flutter platform makes it easy and quick for small businesses to improve their productivity and efficiency, giving them more time and resources to enhance their operations.

Firebase, made by Google, is used by the Flutter platform to store and manage data.

Firebase gives the Flutter platform a robust backend that lets it work well and simultaneously meet the needs of businesses. It does this with cloud storage, real-time database management services, hosting, and authentication.

Firebase is a valuable tool for deploying services quickly because it is easy to use, and the development team can automate it.

How Flutter Programs Will Do in the Long Run

The tech industry is talking about how Google is making a new platform called “Fuchsia,” which has a code name. The forum will be built on Flutter, which is good news for app developers already using Flutter.

The platform isn’t out yet, but it will be designed and coded using Flutter.

So, the platform will become the center of research and development for the “Internet of Things,” which is expected to be one of the most critical business areas in the next few years.

The release of Fuchsia will change how people think about Flutter in a big way, and the framework will soon be the most popular way to make mobile apps.

In the business world of the future, it is expected that the Flutter platform will grow and help close the technological gaps that are already there. As a result, flutter is the best choice for most new businesses that want to make their first mobile app.

It is backed up not only by papers and certificates but also by companies whose names are linked to most of the technological advances in the world. The platform is a type of development that works across platforms, and it has many advantages over native platforms and other types of media.

About 0.21 percent of all apps on AppBrain were made with the Flutter mobile framework, and 0.06% of those apps were installed. The Flutter application development platform seems to be a fast, reliable, and robust choice for making mobile apps.

Flutter is the best way for startups with a small budget and plans to grow and expand with a bootstrapped financial model to make feature-rich mobile apps.

So, there are many good things about Flutter, but they depend on its use.

If used correctly, Flutter gives mobile entrepreneurs everything they need to thrive and grow in the face of tough competition: better widgets, designs, code libraries, and backend support.

Thanks for reading our post “Is Flutter the Right Solution for Mobile App Start-ups?”, please connect with us for any further inquiry. We are Next Big Technology, a leading web & Mobile Application Development Company. We build high-quality applications to full fill all your business needs