MEAN Stack Vs. MERN Stack: A Comparison Between the Two Tech Stacks 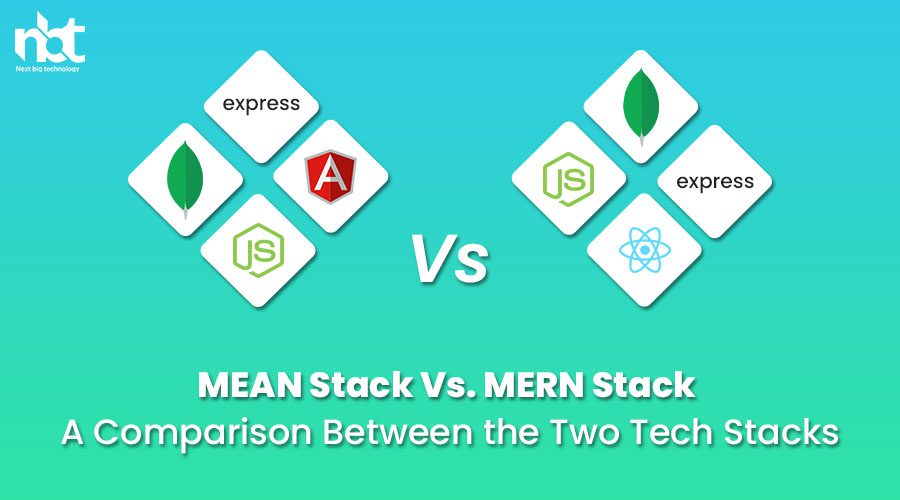 A “technology stack” is a set of related parts, like a group of programming languages and a framework. A technology stack makes sure that the way a project is built is balanced and adaptable.

Once upon a time, developers who worked on CSS, HTML, and JavaScript worked on each language independently. Still, a full stack developer can now handle everything from the frontend to the backend, the database to the user interface, because so many tools and software solutions work well together.

The MEAN stack is a group of programs that can be used to find the mean. The MEAN stack is a complete JavaScript framework for making websites and web apps work well. MEAN stands for MongoDB, Express, Angular, and Node.js, the four technologies that make up the app.

It’s a popular choice for businesses that want a technology stack that uses a lot of plugins and cuts down on system administration time. This is because it combines the most powerful mobile and web application development tools to make things easier and faster.

The JavaScript-based frameworks in the MERN open-source technology stack, which also includes the database management system MongoDB, are referred to by the acronym MERN. Using this chosen technology stack, a robust end-to-end framework for web development can be built, which makes it faster to make web-based and mobile apps.

The MEAN and MERN stacks side by side

The MEAN and MERN stacks are similar because three of their four parts are identical.

MongoDB is a NoSQL document database that stores information in JSON format. This makes it easy to share data across multiple clouds. You can be sure that this will happen. This makes it easier to look at data, change it, and share it.

Express is a free, open-source framework for building web apps that run on the server side. The Node.js program uses it. Express is a popular framework for making web apps because it is easy to use, flexible, and fast. In addition, the ability to make a solid set of features has earned it a lot of praise.

Node.js is a JavaScript runtime environment that is free to use and can run code in places other than a web browser. One Node.js server can handle many connections at the same time. As an event-driven, non-synchronized system, it works well enough.

The frontend technology is one of the most significant differences between MEAN and MERN stacks. The MERN stack adds React to a stack that doesn’t use Angular, while the MEAN stack uses an Angular stack.

Google’s TypeScript runs Angular, a free, open-source framework for building web apps. It simplifies creating UI components and executing code in the user’s browser. React is a JavaScript library made by Facebook that is free and open to the public. It can be used to make user interfaces for mobile and single-page apps.

These two stack items do many things needed to get a web project up and to run. By comparing the benefits of the MEAN and MERN stacks, one can make an informed decision about which one to use to build a particular software product.

Node.js, Angular, Express, and MongoDB are the technologies that make up this stack.

This is what a framework is in JavaScript. The flow of data goes both ways. Apps for phones don’t have any help. However, the way code is rendered and managed has become more accessible. To learn about MEAN stack development services, you should know the steep learning curve.

This stack comprises MongoDB, React, Express, and Node.js technologies. To use a JS library that is free and has an open source. There is only one way for information to be passed on. Providing a backup for mobile apps The result is a smooth picture. Without a doubt, better records will be kept.

Which MEAN or MERN stack is better?

The whole codebase is written in JavaScript, which is essential to the MEAN stack. So it’s easy to do more research and development now. And the best part is that the unified offering saves a lot of time and money on projects.

When it comes to full-stack development frameworks for big web projects, the MEAN stack is the best option.

But the MERN stack makes it easier to make Niche projects and set up CRUD applications. So, React manages this kind of data more efficiently while making an excellent user interface.

Hiring a development company specializing in the MEAN Stack is a good idea.

The React library gives you the most up-to-date tools for making apps, and it was put together with a lot of help from the community. The library can be used for free by people who make Web applications.

It’s built on an MVC framework, which makes development easier. Programmers who don’t know a lot about JavaScript and JSON shouldn’t try to use this stack.

With the help of JavaScript, this technology stack includes both frontend and backend development. React codes can be used in both client and server environments. These JS stack lets pages are made on the server when needed.

What MERN Stack Development Company Can Do for You

Which one do you think is used more often, MEAN or MERN?

If you want to hire engineers with a lot of experience, you should choose a popular technology stack with which they are already familiar.

Thoughts on the End

The main difference between MEAN and MERN Stack is that MEAN uses Angular, and MERN uses React JS.

Angular JS has many benefits, including better code abstraction and file management. On the other hand, ReactJS makes it easy to write code quickly and widely.

Thanks for reading our post “MEAN Stack Vs. MERN Stack: A Comparison Between the Two Tech Stacks”, please connect with us for any further inquiry. We are Next Big Technology, a leading web & Mobile Application Development Company. We build high-quality applications to full fill all your business needs.