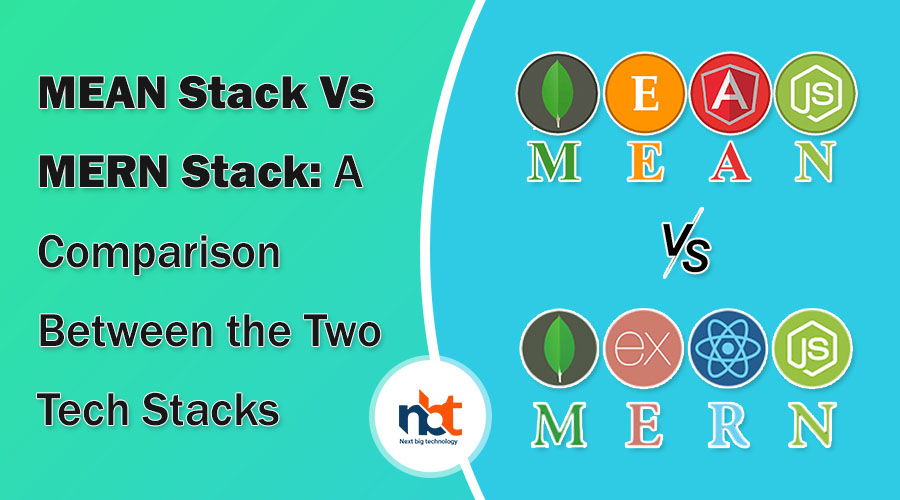 Choosing the correct technological stack, whether you’re a company’s IT expert or an entrepreneur planning to create online and mobile apps, is a challenge. You may have come across a comparison between the MEAN stacks and MERN stacks in this context.

The digital world is constantly changing, and we are witnessing several technological developments and new market demands on a daily basis. As a result, in this digital age, having an app or a website is not the only method to expand your company. You must be astute in choosing the appropriate technology stack for your project.

Choosing the correct technological stack for your company will also have an impact on its future development. Should you use the MEAN stack or the MERN stack? Which one will be more beneficial to your company? To gain answers to these issues, you must first understand the fundamentals of these two, such as their distinctions, similarities, and benefits.

So, first and foremost, let’s introduce the MEAN and MERN stacks!

What is MEAN Stack, and how does it work?

This is a full-stack technology stack that is quite popular. MongoDB, Express.js, Angular, and Node.js are the acronyms for MongoDB, Express.js, Angular, and Node.js, respectively. This stack is used by programmers to create mobile and online apps. MEAN is a JavaScript-based open-source technological stack. This stack is useful for MEAN stack developers who want to build mobile and web apps quickly because it includes key plugins and tools.

The Advantages of Using MEAN Stack

What exactly is MERN Stack and how does it function?

The MERN stack was intended to make the development process go more smoothly. It’s a collection of frameworks, databases, and runtime environments based on JavaScript. This software stack gives MERN stack developers an end-to-end framework, and it’s growing in popularity.

The Advantages of Using MERN Stack

Which is more popular, MEAN vs MERN?

You must pick a popular tech stack, and choosing the right stack increases your chances of employing experienced engineers because more developers are likely to be familiar with it.

The popularity of Angular vs. React stacks, in turn, fosters the rise of MEAN vs. MERN stacks. Despite its popularity, React is currently overtaking Angular.

According to the HackerRank Developer Skills Report for 2020, 32.3 percent of developers want to learn to React in 2020, making it a very popular choice. Angular’s market share has fallen to 27.6%, showing that React is becoming more popular than Angular.

The 2019 StackOverflow Developer Survey report confirms that React is becoming more popular. According to this study, roughly 74.5 percent of developers favor React. Angular, with a proportion of 57.6%, has a comparable percentage.

Both React and Angular are very popular. In the long run, though, you’ll find it simpler to employ React programmers than Angular developers.

Also Read: What is the Cost to Hire Mean Stack Developers?

A Comparison of MEAN Stack with MERN Stack

The use of Angular and React, respectively, is the main distinction between the MEAN and MERN stacks. Both stacks have some beneficial and negative aspects to them.

Node.js, MongoDB, and Express.js are all widely used and have extensive documentation.

Regardless, the learning curve for React and Angular will differ.

Templates and Typescript are used in the Angular framework. With Angular, you may find a steeper learning curve, whereas, with React, there isn’t much of one.

Because both MERN and MEAN stacks use Node.js, Express.js, and MongoDB, a profitability comparison between the two would expose the difference between React and Angular.

Because Angular is a comprehensive framework, it is more profitable. In most cases, you’d leverage React-related third-party libraries to improve designer productivity.

The CLI (Command Line Interface) in Angular increases the efficiency of designers. And you’ll find that using the Angular CLI makes it easy to refactor your code. Because of the presence of third-party libraries, updating your React code requires additional effort.

The data flow in Angular is bidirectional, which means that whenever you make a change to the user interface, the model state is instantly updated. In the case of React, data flow is one-way only. So, if you’re using React, you can only change the UI after changing the model state.

Using third-party libraries while developing enterprise-level apps is another important consideration. MEAN includes Angular, which offers built-in functionality for HTTP calls and integration with the backend.

Alternative libraries for bringing incomparable features are available in ReactJS.

The MEAN stack makes dealing with and upgrading your code easier, which is a benefit of using Angular. Angular can help the MVC architecture by being a well-organized and full framework.

Using an intermediate layer, you can easily isolate database-related code from UI-related code, making it easier to manage and upgrade your code. Due to the inclusion of third-party libraries, managing and upgrading the React code requires additional effort.

Angular provides the Ionic framework for mobile app development company, which allows you to create hybrid mobile apps. Because you just have one codebase for both iOS and Android platforms, these apps keep development costs low. Hybrid applications, on the other hand, fall short of the native user experience.

React Native is a little different in this regard. The MERN stack is a preferable solution for mobile app development since it gives an almost-native user experience.

8. Scalability and security are other important factors.

MERN and MEAN stacks both provide best-in-class security. As a result, you have the option of selecting any of them.

The MEAN stack is an excellent choice if you’re working on an eCommerce project. It can serve as the foundation for dynamic web apps and introduce a more streamlined method to prototyping. For constructing large-scale apps on MEAN stack development frameworks, I prefer the MEAN stack.

Do you want your app’s UI to be basic but sophisticated? Then use the MERN stack to achieve your goal. It can instantly generate a frame and display it on the screen, ensuring a smooth user experience.

Supporting documentation isn’t as important if your development staff is very knowledgeable and skilled with web frameworks. In this case, the learning curve is less suitable, allowing you to choose the MEAN stack.

If your development team has a modest amount of experience, you must consider the learning curve, thus the MERN stack is a better choice.

If you’re working on an enterprise-level project, you’ll need to keep track of the entire architecture. This is why the MEAN stack, not the MERN stack, should be used.

Selecting this option will allow you to benefit from the Model-View-Controller architecture. The MEAN stack, on the other hand, is a good choice if you want to keep the code simple.

The MERN stack makes it simple to construct and develop a CRUD (Create, Read, Update, and Delete) app from start to finish.

The use of React allows for quick data changes and a nice user interface. MERN is an excellent framework for creating a mobile app or a single-page app.

The MEAN stack is the ideal option for you if you want to select a stack that allows you to prevent simple coding errors. Angular uses Typescripts, a system that prevents simple code errors during the development phase.

Both React and Angular are widely used frameworks. However, as React grows in popularity, it will become easier to find React developers in the future.

Consider using the MERN stack if you have a huge pipeline of app improvement work and expect considerable long-term maintenance demands.

MERN, on the other hand, relies on React to refresh the virtual DOM. As a result, MERN allows you to code apps more quickly.

As a result, no framework can address every business goal. To acquire a better result and achieve your business goals, you must do a study on each feature, match them with the fast MERN stacks development needs, and select intelligently.

Aside from the benefits supplied by both stacks, there are some differences between them. Let’s get right to the point to wrap things up!

The close competition between the MEAN and MERN stacks makes it difficult to pick between the two or justify both. Both technologies, after all, have best-in-class functionality and capabilities. To create a dynamic app, choose the MEAN or MERN stack based on your company’s needs.

Which is preferable: MEAN vs MERN?

The popularity of MEAN vs MERN stacks is driven by the demand for Angular vs React. Both are well-known, but the winner is still up in the air, as the project’s requirements alter.

What is the difference between MEAN and MERN?

The size of your project, level of knowledge, productivity, performance, code error prevention, and other considerations all influence your decision between MEAN and MERN.

What are the advantages of MEAN Stack?

MEAN Stack has a number of advantages, including being cost-effective, open-source, cloud-compatible, and allowing for seamless server-side and client-side switching.

What are the advantages of MERN Stack?

High-end tools for building apps, fantastic community support, and a built-in wide suite of testing tools are just a few of the benefits of using MERN Stack.

Thanks for reading our post “MEAN Stack vs MERN Stack: A Comparison”, please connect with us for any further inquiry. We are Next Big Technology, a leading web & Mobile Application Development Company. We build high-quality applications to full fill all your business needs.