How to Earn Money from your Application? 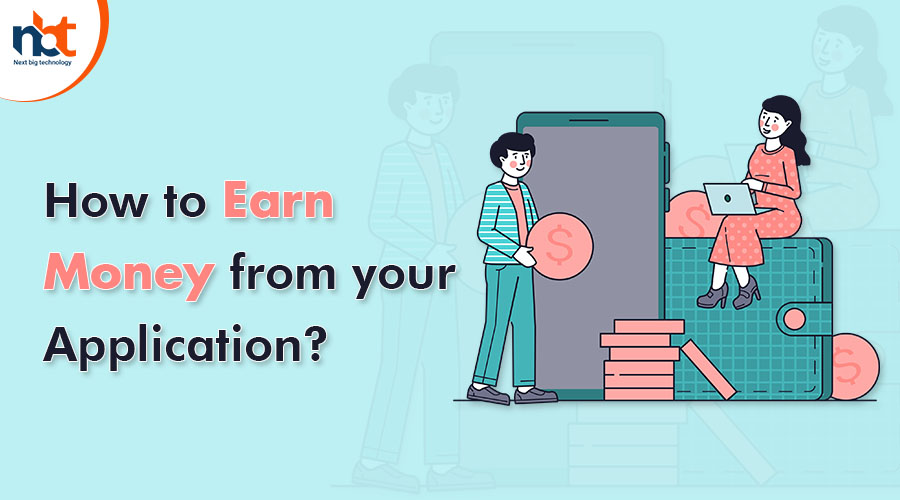 The mobile application development services business has a big potential for millions of dollars in revenue. However, not every app earns the same amount of money on Android and iOS.

Despite using the same mobile application development procedure to make money with an Android/iOS app, not every developer has the good fortune of receiving billions of dollars in their wallets. As a result, newcomers to the mobile business are asking questions like, “Do apps earn money?” and “How do you make money from an app?” — issues we will address in this post.

But, before we go into the answers to these questions, I’d want to point out something – On the Apple App Store and Google Play Store, there are approximately 4.83 million apps available for download, with many more on the way. In other words, generating money via applications is a tough business to break into.

In this situation, focusing on the appropriate aspects before constructing an app will help prevent your app idea from sinking like the Titanic.

So, let’s look at some of the things you should think about before starting to design money-making apps.

When it comes to figuring out how applications make money, the app’s objective is crucial. A thorough grasp of the problem you’re trying to solve, the software development services your app will provide, the potential market impact, and how the app will benefit users and their demands.

When you have a clear idea of what you want to achieve, you may choose the best monetization approach for your app on the app store. Subscription models for service and content applications, for example.

The target demographic is another element that influences how much money you may make from an app. If you’re developing a mobile app for business users, it’s critical to choose a monetization approach that doesn’t waste their time. When it comes to developing an app for kids, it’s also a good idea to provide free application development services.

Before you begin any plan to create an online income through application monetization tactics, you must first determine who your target audience is. Who is the target audience? What are they looking for? How much will they pay? To put it another way, users should be aware of the true value before making purchases.

Performing Competitive analysis can also help you make a judgment about developing money-making apps. The data can be used to figure out what techniques similar applications prefer and how much money they’ve made. This ultimately aids decision-making.

The fierce market competition and competitor analysis aren’t just for the app’s highlights, functionalities, and design. With little research and understanding of the competition, you should be able to figure out how to monetize your app without too much difficulty. All you have to do is ask yourself some questions, such as how much money your competition makes. What is the quality of their models? Is there any loophole that you could use to your advantage?

The technologies you employ in your apps not only improve the user experience and help you stand out from the competition, but they also help you earn money from mobile apps.

Example: A standard commercial mobile app monetization platform approach pays just 70% of the amount spent for a mobile app to developers. A blockchain-based application model, on the other hand, provides 85 percent of the total app profit share.

Now that we’ve covered everything, let’s move on to identifying other models for earning money from apps.

The pricing app plan you choose for your app has an impact on how much money you can make from mobile apps. As a result, they must be conversant with all of the different sorts of mobile app monetization tactics available. Some of them are:

1. Advertising within the app

While the app is free to download and use, app publishers, profit from interactions with the adverts that are presented within the app. This app revenue model has been thoroughly examined and determined to be profitable. Interstitial ads, Banner ads, Video ads, Native ads, Text ads, Native ads, and so on are all examples of in-app advertising.

When considering how to monetize an app without adverts, the first monetization approach to explore is Freemium.

The application is available for free here. Users would, however, have to pay a fee to purchase a selection of virtual elements through the mobile application. Extra lives, ad blocking, premium app content, game currency, and more features are available.

Clash of Clans, for example, earned approximately USD 1 million each day in transactions.

The Subscription model is another technique that has been proposed as a way to commercialize apps.

Users are required to pay a weekly, monthly, or annual charge in exchange for a certain service supplied by the mobile app development firm. In the case of cloud-based services, audio and video content providers such as Spotify, Google Music, and Netflix, this type of business and monetization strategy is frequently advised.

Note that only 5% of successful app developers rely on subscriptions to make money from their apps.

Another way to profit from a mobile app is through sponsorship. This strategy is most commonly used with applications that already have a large number of regular users, and it works well when interacting with brands in the same market sector.

When it comes to addressing how applications make money using this monetization method in further depth, there are two options to consider –

• Decide on a sponsorship cost that will be paid on a monthly basis.

This business and monetization model is used by the Weather Channel app to succeed in the market.

5. The use of crowdsourcing

This year, consider crowdfunding as an alternative funding option. It’s also one of the most successful ways to sell free apps.

To generate cash and execute the necessary promotion, you can share your app idea or publish an MVP version on platforms like Kickstarter, crowdfunding, Indiegogo, and Fundable.

Such app monetization tactics brought in USD 148k in 2017 for the Hello Earth game, which featured a well-known cat character.

This is similar to sponsorship, only instead of offering sole advertising rights to one group, you negotiate with a few interested parties and include their reference links in your application. If you don’t have a wealthy player on the market who is willing to cover your fees, this is a good way to supplement your revenue.

Now that you know how money-making apps make money and what to look for when determining how much money apps make, let’s wrap off this post with some predictions for future developments in the mobile app market.

What Does the Future Hold for Mobile App Development?

You should be informed of how applications make money, as well as how the future of mobile app development looks. Mobile apps have made a lot of money throughout the years, and this trend will undoubtedly continue in the future. Every year, game applications make millions, yet simple apps are still on their way to making millions. The technology trends of augmented reality, artificial intelligence, and virtual reality are destined to infiltrate the mobile app development sector and revolutionize the entire market.

Finally, there are countless possibilities when it comes to how much money an app can make when it is submitted to stores. All you have to do now is rummage through your alternatives and make the best of what you have.

With our global platform of mobile app development companies in the United States, Asia, and other countries, we help our customers and clients get the most out of the latest technology and deliver a higher return on investment for their business. Please contact Next Big Technology for further details.

1. Which apps are the most profitable?

Ans: If we had to name three app categories that generate the greatest revenue for their parent company, they would be music apps, gaming apps, and video streaming apps. All three of these app categories have extremely high levels of engagement.

2. How do free apps generate revenue?

Ans: When it comes to monetizing free apps, there are three main options: in-app adverts, sponsorship, and referral marketing.

3. What is the average cost per download in the app store?

Ans: Apple keeps 30% of the revenue generated by Apple apps and pays the remainder – 70% – to the developers.

4. How much does Google pay for an Android app download?

Ans: Google keeps 30% of the revenue generated by the Android app and pays the remaining 70% to the developers.

5. How much does it cost to download an app?

Ans: The value of mobile app revenue models is fully dependent on the app’s basic functions, such as the platform used, the expectations of the target audience, the app monetization strategies used, and so on.

6. Do apps generate a lot of revenue?

Ans: It is debatable. However, until you have a well-known brand name behind you or a large network of influencers behind you, you will have to wait a long time for the breakeven point to be reached.

Another option is to create many apps and post them on app stores to increase your income potential.

7. What does a mobile app developer earn?

Ans: When it comes to app revenue, the value is entirely dependent on aspects such as platform, features, user expectations, monetization model, and so on.

8. Is it possible to make money with an app?

Yes, anyone can profit from a mobile app.