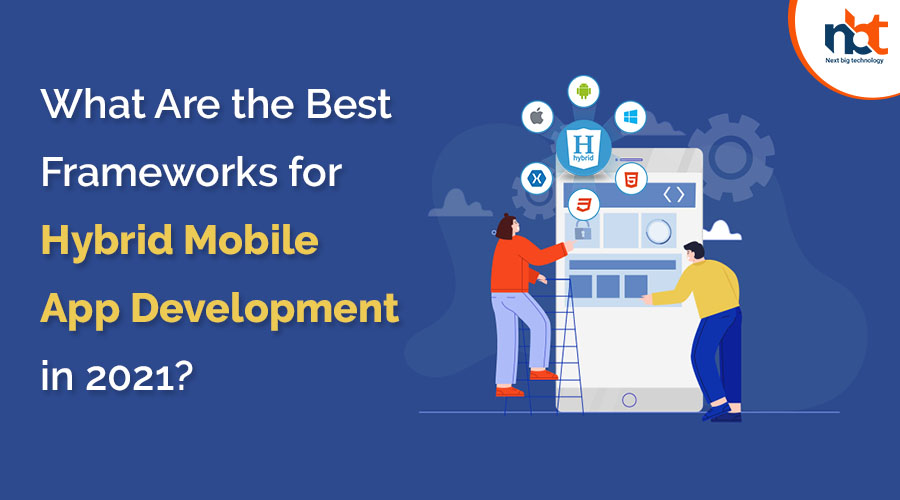 The mobile world of digital technologies is exploding at the moment. There is no reason to believe that saturation will occur anytime soon. Rather, it is expected to make significant progress in the next years.

While the larger companies are always looking for new ways to add value to their app users’ lives, there are still many small and medium-sized firms that have yet to create their own business mobile app. New apps and more entrepreneurs are expected to join the mobile bandwagon in the future.

With all of the fantastic functionality and features they offer, hybrid mobile app frameworks have caused quite a stir in the industry. Hybrid app frameworks have made their presence felt in recent years, thanks to their ability to create native-like apps.

According to a survey, over 60% of business owners prefer to create hybrid apps. On the other side, 80 percent of companies don’t care if the app they design is native or hybrid. This means that developers can use the app framework to create hybrid mobile apps as long as the final product meets the client’s expectations and needs.

Because there are so many possibilities, choosing the best hybrid app framework in 2021 can be difficult. To alleviate your selection concerns, we’ve compiled a list of the top 10 mobile app development frameworks that you should consider using to build your hybrid business app or a request from your mobile app development partner.

Let’s get started without further ado.

The Most Important Factors in Choosing a Framework

For better results, there are a few elements that will determine the framework you should employ in your application. Let’s take a look at each of these factors to see how they might assist you in quickly displaying the best option on the screen.

1. The Project’s Goals and Objectives

The intentions are the most important component in determining what to utilize in your project. It’s critical that the framework you choose for your work supports the outcomes that the project needs to display on the screen.

If the answer we’re looking for isn’t flexible, it’ll be difficult for the team to figure out what to do with it and how to do it. It’s critical that the development framework used can be tweaked to achieve specific outcomes.

It’s critical to comprehend the learning curve of the framework you’ll be using. If the curve is complicated, it is best to recruit experts or choose a simpler curve that the team can understand. If you believe that a specific framework would help you achieve greater achievements and will benefit your future initiatives, then go for it.

It will save you a lot of time if a framework has good documentation. When you’re unsure what to do or how to accomplish it, you may quickly access the manual and find a solution. It’s like having a user manual for the issues you’re facing.

It is critical that the framework you are developing is engaging and will assist you in the event of any confusion or future modifications. Some frameworks feature a fantastic user support system that allows users to enter the market with the appropriate information and bring new and engaging solutions to the stage.

You’ve come to the right place if your framework can provide these.

The finest app frameworks for hybrid mobile app development are listed below.

It is one of the oldest hybrid app development frameworks, having been released in 2013. Ionic has been used to create over 5 million apps, demonstrating the confidence that corporations and developers have in this hybrid framework. Ionic-based mobile apps provide users with a native-like mobile experience. Hybrid app developers, on the other hand, love it because of the incredible built-in features.

React Native comes in second on our list of the best hybrid app frameworks for 2021. It is a Facebook product that was first introduced as a web development ReactJS platform in 2013, but it took another six years for the final stable version. Its first stable release was released in June of this year. It makes cross-platform app creation a piece of cake for programmers. Users get a native-like experience with React Native app development, and it’s quite stable.

Xamarin is a hybrid app framework owned by Microsoft that is used to create aesthetically pleasing cross-platform mobile apps that function smoothly on iOS, Android, and Windows. Its popularity skyrocketed after it was acquired by Microsoft in 2016. C# is the programming language utilized here, which makes development easier for developers regardless of the platform they code for. Developers can also create hybrid apps using.NET capabilities and native APIs.

As far as hybrid mobile app development goes, Corona SDK will be the fastest option in 2021 and beyond. It’s 4x faster than the other hybrid frameworks in this article. Lua, a lightweight scripting language, is used. It is feasible to create single-code apps that perform admirably on platforms such as iOS and Android. Hybrid app developers choose it for creating 2D games, enterprise, and education apps.

6. JQuery Mobile is a mobile version of JQuery.

It’s another hybrid framework for creating platform-agnostic apps. It makes responsive webpages that function on a variety of platforms with the Javascript library and HTML, and mobile web apps with jQuery and jQueryUI. It is less commonly utilized in mobile app development and is recommended when working on the app’s shell. It can be used in combination with other well-known frameworks.

It creates cross-platform apps by combining Angular JS with Bootstrap. It is uniform across devices and platforms, allowing developers to use features like sidebars, switches, and overlays, among other things. It’s a free, open-source hybrid app framework that’s released under the MIT license.

Intel XDK is the next greatest mobile app framework for 2021, with its incredibly intuitive user interface simplifying workflow and allowing developers to construct magnificent HTML5 websites and apps. It offers a troubleshoot option and profiling options that assist app testers in quickly detecting bugs and vulnerabilities on a variety of devices. It also makes it simple for developers to export the program for compilation.

It’s a free-to-use HTML5-based hybrid app framework. It is preferred for both Android and iOS app development. It’s a stand-alone app framework that doesn’t rely on Angular JS or ReactJS. It allows developers to pick from a variety of frameworks, including Framework 7 Core, Vue, and React. You can also choose between PWA, web app, and Cordova app as your target platform.

It’s one of the most well-known mobile development frameworks, and it’s used to create apps for Android, iPhone, iPad, and other tablets. Titanium Studio is used to code hybrid apps, and Javascript is used to code them. It’s also compatible with Android XDK and Xcode on the Mac.

The top ten mobile app development frameworks are listed above and can be used to create your next app. If you’re not sure which one to use, get in touch with us and we’ll help you decide. We’ll walk you through the process of selecting the best hybrid app framework for 2021 based on your needs and goals. We provide free consultation, so don’t be shy and introduce yourself to our help representative right now.