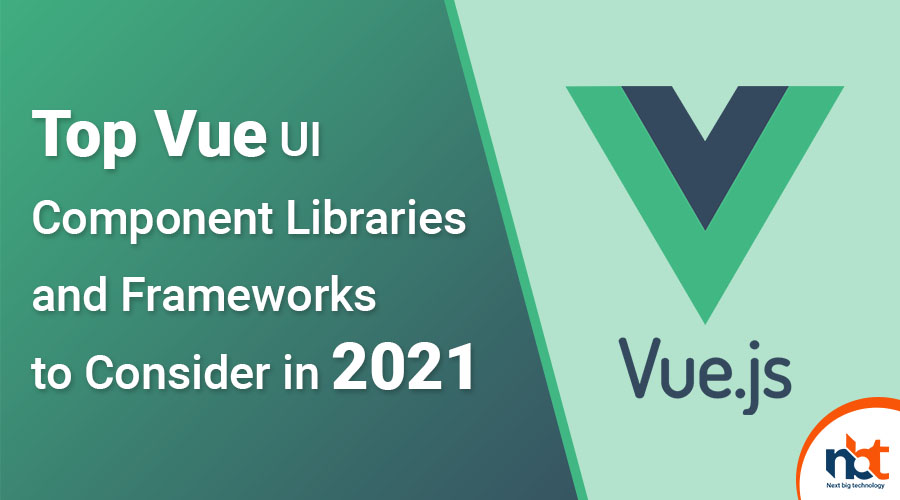 We’ve always thought of JavaScript as a powerful programming language. After all, it has elements that are event-driven, goal-oriented, and dynamic. Vue.js is one of the most advanced JS frameworks for constructing SPAs (Single Page Applications) and UIs (User Interfaces) using JavaScript.

This article will look at the most well-known Vue UI component libraries and frameworks for 2021. Continue reading to learn more!

This performance-oriented Vue framework aids in the creation of Vue UIs. The Quasar UI library appears to rely on Material Design at first glance. However, after you’ve begun using Quasar, you can fine-tune anything to fit your design system.

Almost all of Quasar’s Version-1 elements, directives, and plugins have already been released. It also released compostables to assist developers in learning more about the Quasar API.

You can use Quasar as a UI framework to design a Vue application for mobile, desktop, and web platforms because it has an active community on Twitter and Discord and is well-established on Github.

Vux is a mobile user interface. The Vue component library was created specifically for the WeChat app. This China-based library is typically used in the creation of mobile apps. Many elements from the WeUI are used in it.

Due to a lack of management staff, the VUX developers are unable to spot common concerns with this library.

Despite this, the community hub recognizes the problem. You can install its components based on your specific needs, which eliminates the need to install the entire component bundle.

Element Plus adds a large number of low-cost components to Vue 3. The majority of these components are required to create a complicated app. In addition, this library includes advanced time and date pickers, timelines, calendar components, and trees. Element Plus also has a framework-wide globalization mechanism and simple animations.

With rapid updates, great problem handling, high customizability with SCSS variables, and pluggable elements, Element Plus is one of the most well-known Vue 3 UI frameworks.

Bootstrap Vue is a well-known CSS library that incorporates both Bootstrap and Vue’s capabilities. You can use this library to create ARIA-compliant, mobile-first, and responsive web projects. Bootstrap Vue documentation is simple to set up and comprehend. It also speeds up the development of front-end apps.

Bootstrap Vue has a robust and engaged community that makes it seem comfortable to use it to design user interfaces. It includes over 1000 icons, several directives, 45+ plugins, and over 85 components.

With SASS libraries, you can make the styling of your components ideal. Furthermore, it is Vue CLI-3 compliant and works with all recent browsers and accessibility guidelines. Many reusable UI elements, such as cards, navigations, and carousels, are included.

Material Design is also used to inspire this Vue component collection. This lightweight library has a simple API that aids in the building of app layouts. Keen UI is mostly concerned with interactive components that require JavaScript.

It lacks typography, a grid system, and other aspects because it isn’t a CSS framework. UiCheckbox, UiCalendar, UiButton, UiAutocomplete, UiAlert, and more components are available in Keen UI.

This Vue UI package contains some high-quality demonstrations and elements to construct engaging, rich user interfaces, according to the Ant Design guideline. Many UI features, like statistics, drawers, skeletons, and more, are available in Ant Design Vue to help you better your web projects.

Ant Design Vue Version-2 has been updated to make it easier and faster to integrate, has a smaller bundle size, and now supports Vue 3. It also works with an electron, server-side rendering, and current browsers.

This Vue UI framework may be used to create front-end web apps. Fish UI supports ES2015 and Webpack 2.0 and is compatible with modern browser systems. This China-based library has little or no documentation. Nonetheless, this library’s community center is sufficiently active to resolve all difficulties.

Equal describes itself as a TypeScript-based Vue 3 UI component framework. It has a large capacity due to its user-friendly documentation page and attractive components. It currently only offers an opinionated style that is more difficult to customize than the other frameworks on our list.

Equal, on the other hand, is a wonderful set of components that provides best-in-class Typography, outstanding performance, and excellent animations.

Buefy is a Bulma-based Vue UI component library with a small footprint. Buefy combines Vue and Bulma to enable you to create aesthetically pleasing apps with minimal code. On a regular webpage, you may either import the entire thing or individual elements.

Buefy may be easily integrated into your project using CDN or npm. Buefy provides a variety of UI icons, layouts, and components that are simple to use. SASS can be used in its components to match your theme. Buefy also works with contemporary browsers.

PrimeVUE is one of the most popular Vue UI component packages, with over 80 components. Password forms with sliders, meters, graphs, trees, charts, split buttons, knobs, and more are among the components.

It works best when used in conjunction with Vuelidate, a form validation library. PrimeVUE works with pre-made themes while also providing access to a full-featured visual editor that allows developers to customize their own.

PrimeVUE is thriving thanks to the adoption of Vue 3. It gives developers the ability to combine a well-designed library with Vue 3’s capabilities.

Vuikit not only supports every modern browser, but it also comes with a variety of default themes and styles that you may customize without affecting the components’ functionality. Vuikit provides components like form, grid, icon, breadcrumbs, table, tabs, and more.

The focus of this UI framework is on mobile user interfaces. Ionic Vue has a large Slack channel with basic members, a wonderful community, enterprise support, and many StackOverflow queries.

As a result, you can use it whenever you require assistance. Ionic Vue is used by a lot of big companies because its team is known for keeping its UI frameworks up to date.

It’s a simple, open-source, and easy-to-use modular component library that gives you the tools you need to build Vue apps quickly and efficiently. Chakra UI is themeable, accessible, and composable in every way. It also has an extraordinarily high level of responsiveness and compatibility with the dark mode.

Chakra UI Vue also includes layout components like CStack and CBox, which make customizing your UI components with minimal props a breeze. It also has a Webpack plugin solution that allows it to auto-import its components.

This article should help you select the proper UI library for your next Vue.js project, hopefully. If you can’t locate a Vue UI library that’s specifically designed for your job, you should hire expert Vue.js developers.