Best React Libraries and Frameworks to Look Out for in 2022 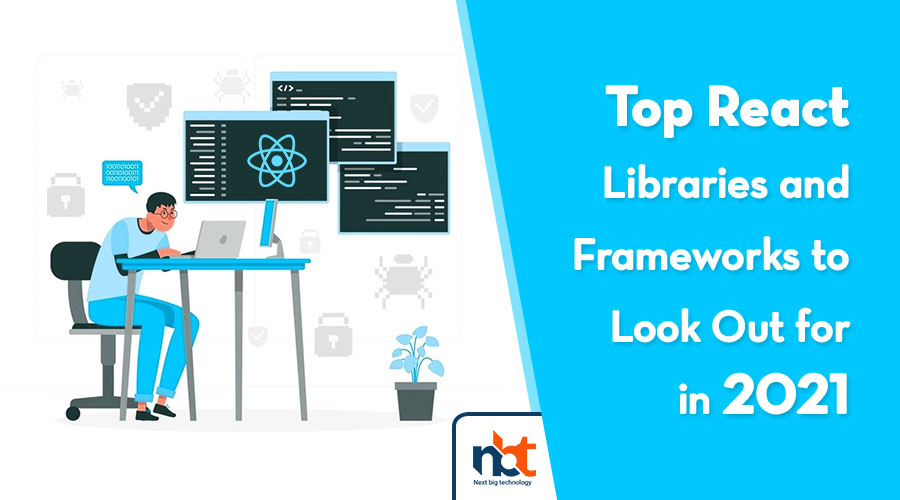 Every developer should stay on top of the most recent news and trends in their primary technology. The ability to learn and adapt to an ever-changing environment is the most important characteristic of a developer. If JavaScript is your primary programming language, you’ve come to the correct place.

ReactJS has gained a lot of traction since its debut. Following its launch, many industry leaders switched to this technology. Developers, on the other hand, have a difficult time identifying the best React frameworks for their apps. You’ll learn about the best React libraries and frameworks in this blog.

What is ReactJS and how does it work?

ReactJS is an open-source JavaScript toolkit that assists developers in creating high-quality user interfaces for mobile and web apps.

There are numerous advantages of ReactJS and reasons to use it in your project. It’s compatible with various JS libraries and frameworks, and it’s made up of standalone, small pieces of code called Components. These components can be used to make some fantastic apps.

Take a peek at the best 20 React libraries and frameworks before you start your next React project. They can help you build some outstanding UI apps.

For JavaScript apps, Redux is a state management solution. It’s most commonly used in conjunction with React, although it also works with other React-like frameworks.

For Redux, it’s now able to connect all components directly to the entire state, which eliminates the need for call-backs or props.

Create React App is a command-line utility that requires no development configuration. It encourages you to create your own standard and guides you through the app development process.

There is no complexity because you only need a build dependency. The Create React App has behind layers of ESLint, Webpack Babel, and other features that make it more suitable for small web applications.

This set of fundamental components is designed to help you create a stable user interface with user-defined sizes and design limitations.

Rebass is all about rapid design and development, with a footprint of only 4KB. Through its compatibility with Theme UI and best-in-class assistance for theming, Rebass aspires to be useful, minimal, extendable, unopinionated, and themeable.

React Admin is a tool for building B2B admin apps using REST/GraphQL APIs that may be tweaked by hand. Redux, React Router, React Final Form, and Material UI are among the popular projects used in its development.

Webpack, NPM, DVA, Dora, and Babel are all part of the Ant design framework. This component collection is extensive, and it has a large and loyal customer base.

Furthermore, it allows you to position your UI components, resulting in a seamless user experience. This helpful React module supports ES6 and makes integration a breeze.

Grommet is a component library designed for online projects that are mobile-first, accessible, and responsive. It supports screen reader tagging, keyboard navigation, and atomic design techniques, among other things.

It also includes a large number of svg icons. Twilio, Samsung, HP, Boeing, Uber, and Netflix are just a few of the huge companies that have used Grommet to create their web apps.

This set of components was created by Google to implement their popular Material Design. Material UI has almost 67000 stars on Github, making it the most popular UI package among all React libraries.

It’s easy to use, light, stylish, and straightforward. Developers have been using it for a while, but it has grown in popularity as a result of regular improvements.

React Spinner, unlike other React Libraries, offers something unique. It consists of Halogen-powered loading spinners. It’s an amusement factor that keeps visitors engaged as the page loads, preventing them from feeling compelled to leave, resulting in a better user experience. React Spinner includes over 20 React loaders available for all users.

React Bootstrap is a UI kit based on the Bootstrap framework. It replaces Bootstrap’s JavaScript with React to give you more control over the form and function of each component.

Every component is designed to be both needed and accessible for front-end framework development. Because React Bootstrap is so similar to its Bootstrap cores, developers can choose from thousands of ready-to-use Bootstrap themes.

UI with semantics Semantic UI’s official plugin is React. Shorthand props, a declarative API, augmentation, an auto-controlled state, sub-components, and other features are all included.

The React components in Blueprint are primarily intended for use in desktop apps. These components are especially well-suited to the creation of data-dense and complicated user interfaces.

You may use code to create and display icons from the component library, select time zones, communicate with times and dates, and more.

DnD demonstrates React’s Drag-and-Drop interface. It allows users to choose visual objects and then move them to an appropriate spot on the device screen using gesture and grabbing-based user interaction.

React DnD is built with the HTML5 drag and drop API and uses Redux internally. It provides the necessary capabilities for creating complicated drag-and-drop interfaces like to Trello while maintaining data consistency and transfer in the app state. In most circumstances, this API is the most appropriate library for creating drop events.

Styled Components This package enables you to construct reusable, tiny components that are crucial to your application’s design.

When using traditional CSS, you may run into the problem of selectors being overwritten in unexpected locations on the website. Developers may avoid this problem thanks to Styled Components, which allow them to use CSS syntax directly inside all components.

The Fabric core is a collection of SASS elements paired with CSS classes, allowing for a wide range of animations, colors, and other effects.

This outstanding React package serves a specific, focused purpose: evaluating tabular data and big lists efficiently. This is a valuable library if you have a large number of components or if you need to evaluate several columns in a single table.

An autosizer, a multigrid, an arrowkeystepper, a columnsizer, a cellmeasurer, and other components are included in React Virtualized. This versatile and one-of-a-kind React library is designed to meet your tabular needs.

This well-known animation Spring setup is used by the React framework to describe the animation. As a result, your concerns about complications and duration are alleviated.

React-motion additionally uses stiffness, damping, and accuracy algorithms to improve the flow of development within React elements. The React-Spring API connects declarative and imperative methods. Additionally, you can anticipate a shared, safe transition.

Every language has its own set of rules and traditions. It’s difficult to apply those distinctions to multinational projects, which is why React Intl was created. FormatJS serves as the foundation for React-Intl.

This open-source library was created by Yahoo to make internationalization as simple and straightforward as possible. It includes quick components and an API for formatting dates, strings, and numbers, as well as handling pluralization.

You may do this using JavaScript to create true desktop apps and give them a new look or feature. React Desktop is recommended for creating desktop apps with little or no effort.

From typography, basic layouts, icons, and colors to function-based features like toggles, dropdowns, feedback indications, and file uploads, it includes a wide range of tools and components. After you’ve installed the Evergreen package, you can choose the elements you want to import.

State management is simple and effective with the MobX library. Any React library focuses on preventing developers from changing the state, but MobX has a unique feature that assures that everything is extracted.

It responds to every observable attribute discovered at the moment the defined function is implemented. MobX and React collaborate, and they’re both quite powerful when they operate together. MobX aids in the updating and storing of app states.

In the ecosystem, each of the React libraries and frameworks listed in this article serves a specific purpose. Your company can do simple JavaScript jobs by utilising these capable libraries.

If you can’t locate a library dedicated just to your need, you should seek assistance from skilled React.JS developers.