What makes Node.js so fast? Top 5 best use cases for Node.js 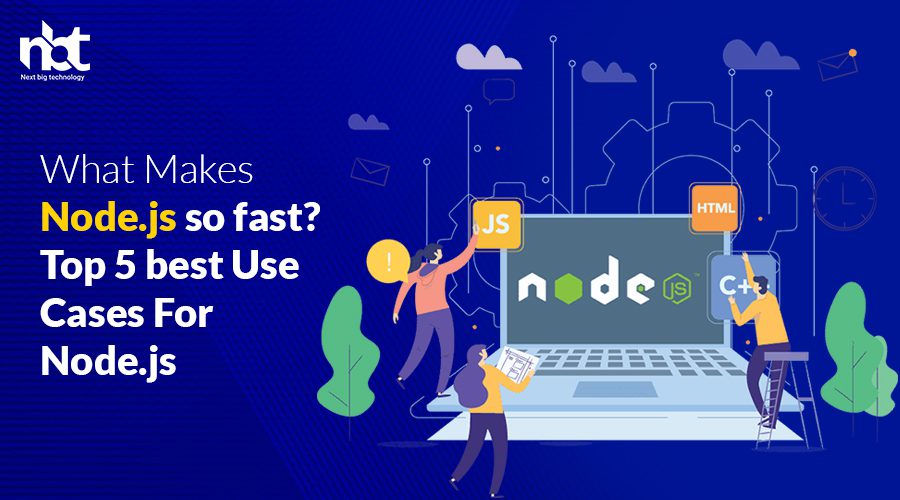 What if you didn’t think Node.js would catch on so quickly? If so, don’t worry; you’re not the only one. Node.js has been the most popular platform for making websites and apps since it was made in 2009.

Node.js is widely used and successful because of a lot of things. It is easy to learn, and a large, helpful community exists.

Because of this, it’s not surprising that big tech companies like PayPal, LinkedIn, and Uber are using the framework and praising it.

How come Node.js is so fast?

When people think of Node.js, the first thing that comes to mind is how quickly it runs. We aim to figure out why Node.js is so much faster than its rivals. The term “execution speed” needs to be defined.

Now, let’s look at a few details that will help us understand the magic that makes Node.js so fast.

Node.js is also asynchronous and has only one thread. This means that no I/O operation will ever stop another one from happening. You can also do other things simultaneously, like send and receive emails, read files, do database queries, etc.

Also read : How to Hire the Best Node.JS Developer for Your Project? A Guide

Each request sent to the web server will not start a new Node.js process. But there would always be a single Node.js process running and ready to accept new connections. Because JavaScript is run on the process’s main thread and all other I/O operations are run on other threads, there are rarely any delays. Node.js (V8) uses a virtual machine that is a JIT compiler to run JavaScript. The V.M. can turn the source code into machine code while the program runs. The most frequently used (or “hot”) functions can run better if directly compiled into machine code.

Because of these things, we could start to figure out why Node.js is so fast. Now, do you want to look into how Node.js works to find out how it does all of this?

Seeing the Value of Being Different

An example will be used to explain the idea of asynchronous processing.

Let’s say you are on top of a mountain and have 100 balls. Your job is to get all the balls to the bottom of the mountain as quickly as possible. It would be best to push the balls simultaneously since you can’t push them all simultaneously. Right now, you can choose between two options.

Since the program and the person who sent the message never work simultaneously, an event loop is just a way to send events.

Node.js adds a callback to an I/O operation so that other events can be handled in the background while the operation is happening. Once enough information has been collected, a callback is set up.

Look at the diagram below to see how the event loop in Node.js works.

The web server’s event loop handles all requests by adding them to a thread pool with the appropriate callback.

After the request has been processed, the callback is carried out. Callbacks can also be used for other time-consuming tasks, like database queries.

When people ask us, “What’s the best use of Node.js?” we usually say, “web servers.” In this case, a real-time implementation is an answer. When used in this way, Node.js shines.

Playing Videos on the Internet

“Streaming” means breaking up large amounts of data into smaller pieces instead of one big. Node.js is the best way to build an app that streams videos. It’s great because it has parts that make it possible to broadcast live video.

Additionally, you can make data streams that can be read and written. Also, Node.js lets you process the files as they are being uploaded.

The most popular streaming service in the world, Netflix, uses Node.js to run its business in more than 190 countries and regions. So, why does that happen?

So, why did Netflix choose to use Node.js?

Node.js is used to build all of Netflix’s user interface. Netflix quickly decided to use this on all their stack layers because it worked so well.

Programs with a high capacity for growth

Node.js has become the framework of choice for any app or platform that keeps getting new users. Many well-known companies use Node.js because it allows them to scale easily.

Node.js is a modern web framework with many useful features, like cluster modules. It allows for the distribution of work across multiple CPU cores, simplifying the delivery of results via smaller modules without exhausting the RAM pool.

More than that, Node.js uses a non-blocking event loop that lets servers handle requests without waiting.

Also read : Why should you go for Node.JS Development than Others?

The most common kind of real-time, multi-user app is a chat program. When it comes to using Node.js, a chat application is right up there with games that use a lot of data and websites that get a lot of traffic. This is because it can work well on a wide range of devices.

Using a proxy server could make it impossible to use any web application. Many popular third-party servers, such as Nginx and HAProxy, struggle under a load of a high number of simultaneous requests.

Node.js could save the day because it’s easy to use as a server-side proxy and can handle many connections simultaneously without stopping other processes.

Node.js has been a lifesaver for many programmers and businesses because it works quickly. Large corporations have taken advantage of this feature of Node.js for some time now. This essay goes into detail about what makes Node.js so unique and fast.

We also spoke about the five finest applications of Node.js. The most important thing that business owners and managers should take away from this article is the recommendation that they use Node.js if they plan to build a website, online application, or mobile app that processes data in real-time.

Thanks for reading our post “What makes Node.js so fast? Top 5 best use cases for Node.js”, please connect with us for any further inquiry. We are Next Big Technology, a leading web & Mobile Application Development Company. We build high-quality applications to full fill all your business needs.