The Positive and Negative Aspects of Node.js Web App Development 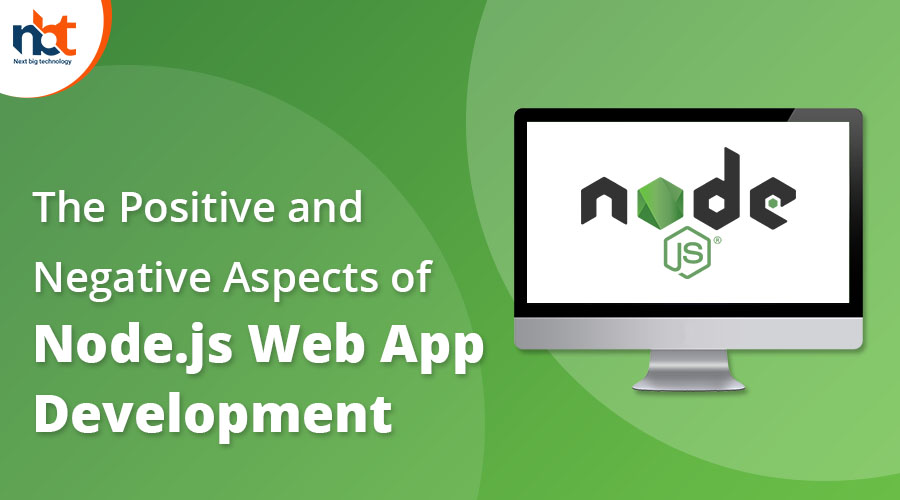 There should be no doubt that JavaScript is one of the most popular and commonly utilized client-side programming languages available.

It’s mostly used as a web front-end development tool, but it’s also a valuable customer for the creation of cross-development platforms.

It has also gained a reputation for being used in a variety of other notable platforms, such as React Native, PhoneGap, Titanium, Apache, NativeScript, and Appcelerator.

The current circumstance has widened the scope of JavaScript’s application, and it is now used for Node.js web development has surely aided this huge transition in web development.

What exactly is Node.js?

The most basic explanation of Node.js is that it is a Javascript run-time environment that assists in the server-side execution of JavaScript code. It is a cross-platform open-source JavaScript that aids in the building of real-time network applications.

Furthermore, it uses a single-threaded event-based loop to ensure that all executions are non-blocking. Node.js, on the other hand, is not a framework and has nothing to do with PHP,.NET or Java.

Let’s look at the main advantages and disadvantages of utilizing Node.js for server-side programming.

Also Read: Why should you go for Node.JS Development than Others?

The Benefits of Node.js

Let’s look at the biggest benefits of utilizing Node.js for server-side programming:

One of the main advantages of Node.js is that it is simple for developers to grow applications both horizontally and vertically. By adding extra nodes to the existing system, the applications can be horizontally scaled.

Furthermore, during the vertical scaling of the application, Node.js allows you to add extra resources to single nodes. As a result, it is very scalable and offers a better alternative to existing JavaScript servers.

Because JavaScript is one of the most widely used programming languages, most front-end engineers are familiar with it.

It becomes much more straightforward for them to begin using Node.js on the backend. It is simpler to learn Node.js and to work with it takes less time.

Furthermore, they are not required to use any other server-side programming language. It also makes web application deployment easier because JavaScript is supported by practically all web browsers.

js is a full-stack JavaScript that can be used to serve both client and server-side applications.

As a result, you won’t need to hire different developers for backend and front-end development. It helps you save both money and time. 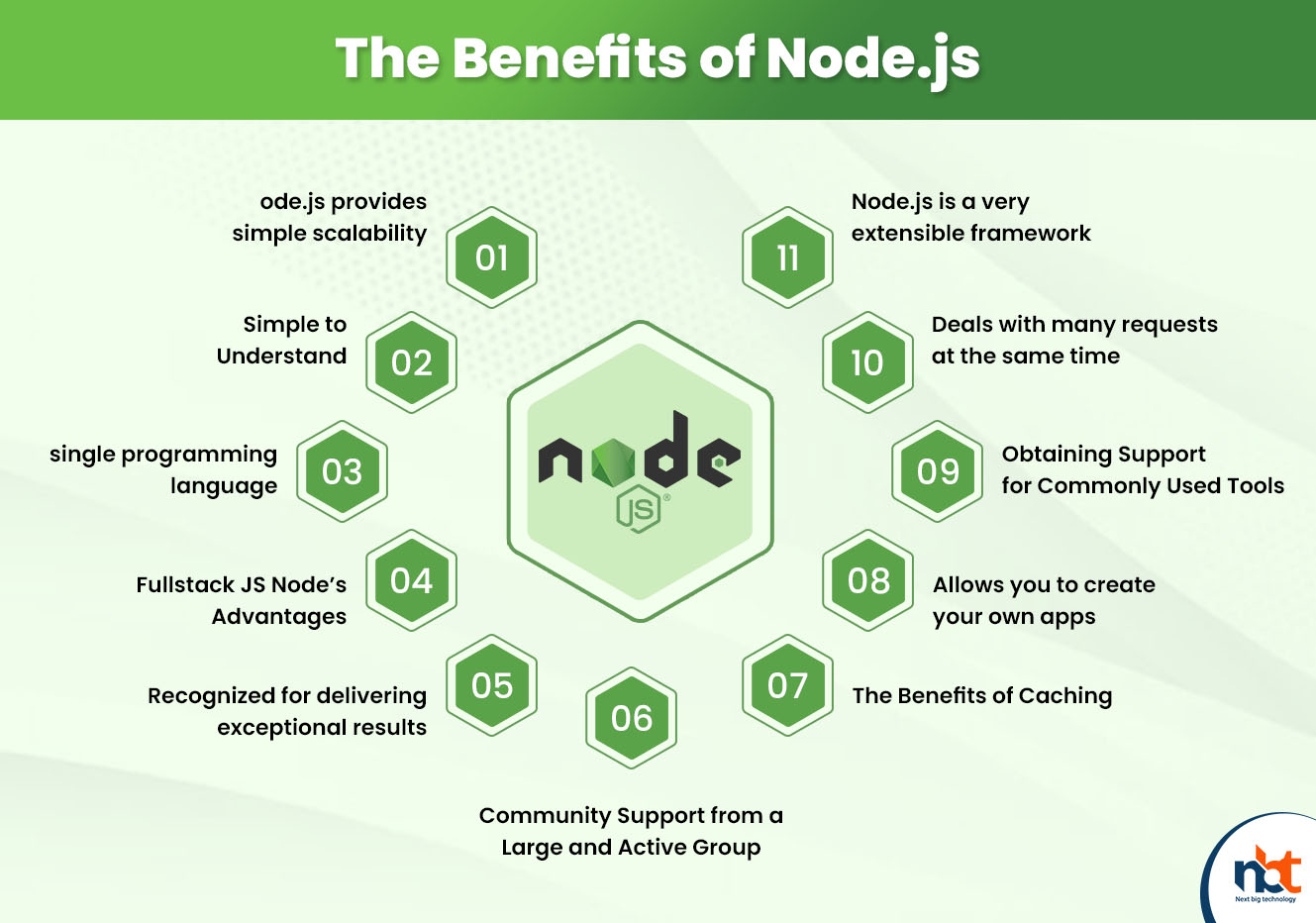 Node.js interprets JavaScript code using Google’s V8 JavaScript engine, as previously stated.
The JavaScript code is directly compiled into machine code by this engine. This makes it much easier and faster to put the code into action.

Because it provides non-blocking I/O operations, the runtime environment improves the speed of code execution.

6. Community Support from a Large and Active Group

Node.js is fortunate to have a large and active developer community that is always contributing to its development and enhancement.

In reality, JavaScript programmers support the developer groups by supplying ready-made and simple solutions and scripts on GitHub. Many more developers are expected to be initiated in the future by the developers.

7. The Benefits of Caching

The Node.js open-source runtime environment also allows for the caching of single modules. Every time the first module is requested, it is cached in the program memory.

8. Allows you to create your own apps

Another benefit of Node.js for developers is the flexibility with which they may create apps and technologies.

This is an important feature that Ruby on Rails lacks when it comes to imposing rules. While developing applications, you can start from the beginning.

Developers can obtain extended support for a variety of commonly used tools using Node.js. Let’s have a look at an example. If you wish to test the source code of a Node.js application, you can use Jasmin or other unit-testing tools to accomplish it.

10. Deals with many requests at the same time

Because Node.js has the option of non-blocking I/O systems, it allows you to process several requests at the same time.

The system can handle concurrent requests more effectively than other systems, such as Ruby or Python. The incoming requests are organized and carried out in a timely and systematic manner.

11. Node.js is a very extensible framework

Node.js is known for being highly extendable, which means you may adapt and extend it to meet your specific needs.

JSON can also be used to provide a means for data to be exchanged between the web server and the client. It also comes with built-in APIs for creating HTTP, TCP, and DNS servers, among other things.

The Negatives of Node.js

Node.js, on the other hand, has some drawbacks that must be addressed.

One of the most common issues that most developers confront is that the Application Programming Interface (API) changes frequently and does not remain stable.

Occasionally, a new API arrives with a number of modifications that are backward incompatible. As a result, developers are required to make changes to the accessible code bases in order to ensure compliance with the current Node.js API version. 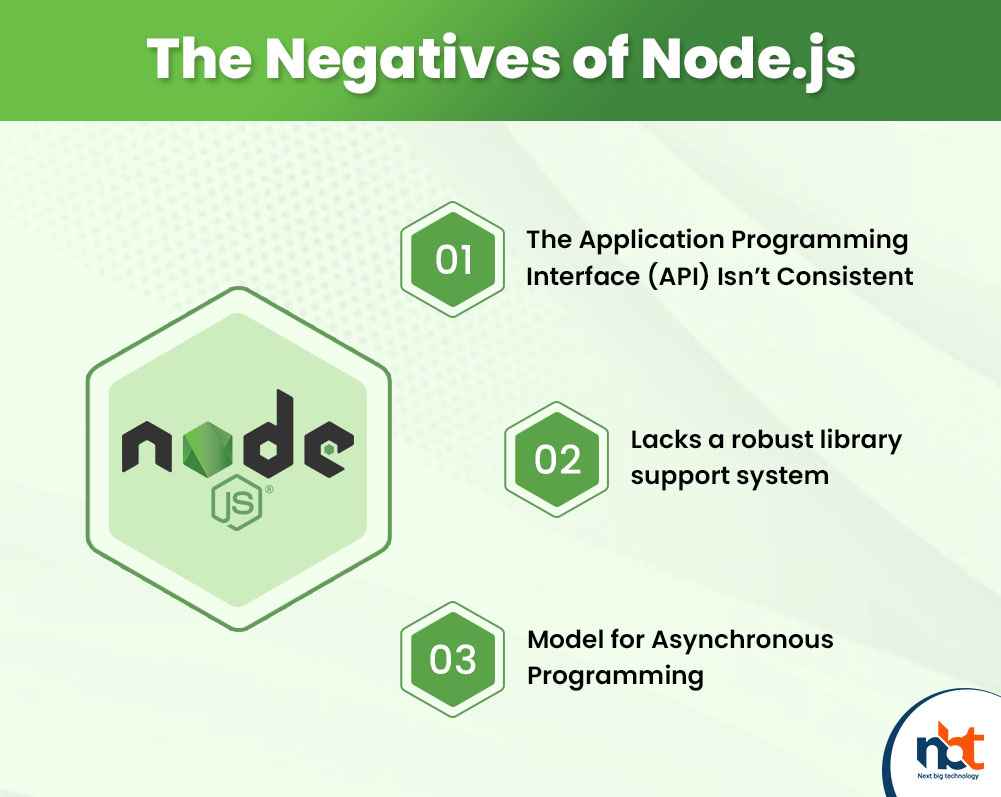 In comparison to other programming languages, JavaScript lacks a well-equipped and powerful library system.

As a result, users are obliged to use a common library to do activities like Object-Relational Mapping (ORM), image processing, database operations, and XML parsing.

This makes it difficult for developers to use Node.js to perform even basic programming tasks.

Adoption of the asynchronous programming approach is a must if you want to make your applications more scalable.

However, in comparison to linear blocking I/O programming, many developers may find this programming approach to be more complex.

Another disadvantage of asynchronous programming is that the code tends to become clunky, forcing programmers to rely on nested calls.

In comparison to its disadvantages, Node.js is more beneficial to developers. What’s more, it has broadened the scope of JavaScript applications, indicating that it may be used for both frontend and backend servers.

With the passage of time, an increasing number of commercial companies have implemented Node.js, with excellent results.

Thanks for reading our post “The Positive and Negative Aspects of Node.js Web App Development”, please connect with us for any further inquiry. We are Next Big Technology, a leading web & Mobile Application Development Company. We build high-quality applications to full fill all your business needs.