A Mobile App Idea: How Do You Patent It? 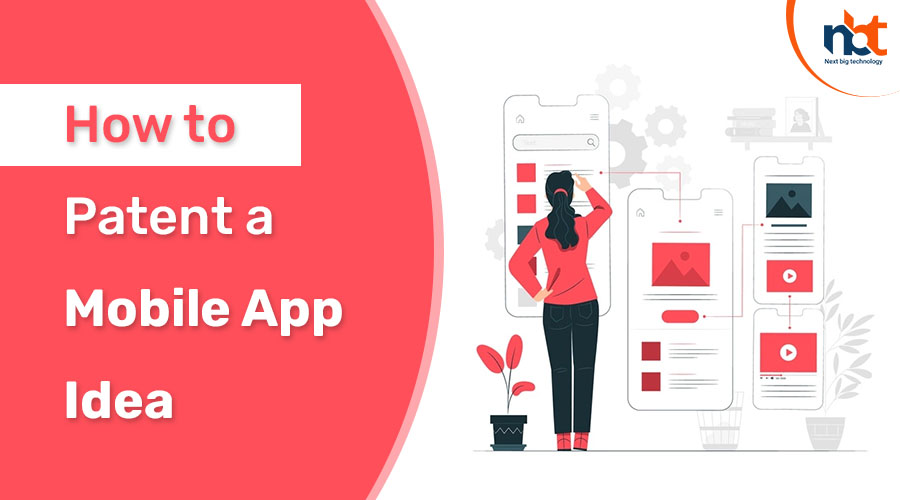 Do you have a unique app concept in mind? Are you concerned that someone might steal it and use it before you? Fortunately, patent, trademark, and copyright laws protect mobile app innovations. Many entrepreneurs and startup founders assume that patenting their software ideas protects them from being used, made, or sold by others.

A patent is essential to protect a unique app idea against copycats in the marketplace who may try to steal it. However, in order to be subject to patent law, your app idea must be novel and unique. If it’s a clone of another program, your efforts will be useless.

What Does It Mean To Patent A Mobile App Concept?

In layman’s terms, a patent is a type of intellectual property legislation.

Is it possible to patent your mobile app concept?

Because it’s an element with several ways of interaction, you can patent a mobile app idea. Because it is under the law category covered by copyrights, the app code cannot be patented. As a result, you can patent the app’s method or approach for completing a given task.

Why would you want to trademark an app concept?

Your app idea qualifies for protection because it is your only intellectual property. With an approved patent, you have the legal right to seek compensation from anyone who attempts to break current patent restrictions. The following are the primary reasons for patenting an app concept:

What Are The Eligibility Requirements To Get A Patent?

A mobile app idea’s patent eligibility is determined by three key factors. The following are the details: 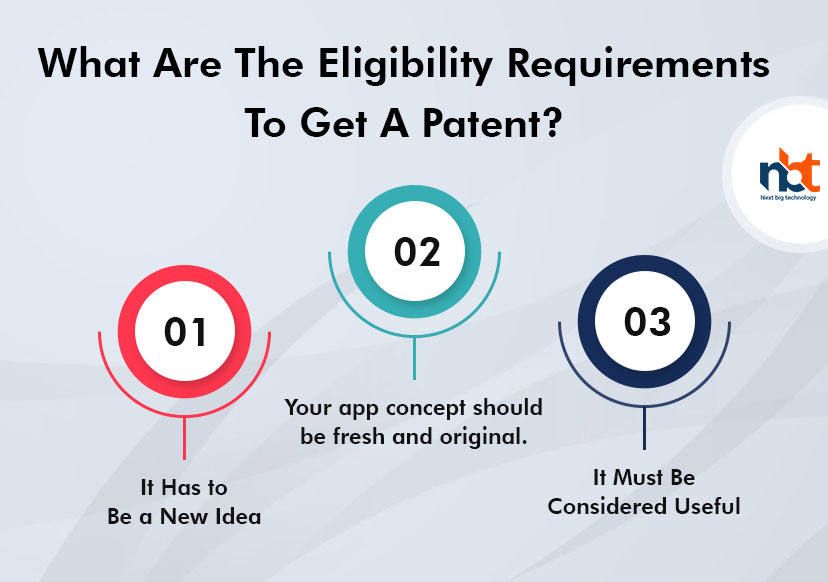 Patents are used to protect new inventions. They are offered to the invention that is stated as a remedy to every difficulty, according to WIPO (World Intellectual Property Organization).

The app process is classified as an invention because the mobile app idea is not a tangible item. Nonetheless, the process, like any other invention, should resolve all issues.

2. Your app concept should be fresh and original.

Even though your mobile app idea solves a problem for users, it may not be eligible for a patent. Your application concept should be fresh and unique.

It should not have been made public sooner, and it should not have included YouTube videos, books, papers, pending patent apps, and other sources. It must be unique and not already be in use; otherwise, you will not be able to patent it.

3. It Must Be Considered Useful

Being classified as a helpful app does not rule out the possibility of your software falling into the entertainment category or anything similar. All your software needs to do is work, at least in principle. This prohibition prevents people from patenting ineffective apps.

As a result, in order to identify your software as an asset, you must write a clear and concrete description of how it works.

Check to see if a potentially unique mobile app idea has already been patented by someone else. As a result, every linked app idea that is either pending or marketed requires a thorough investigation. Your state or country will have a database where this information can be stored and viewed.

Furthermore, you can search the WIPO’s IPC Catchword Index, which contains information on many international patents. You will be able to grasp how to patent a mobile app idea in this manner.

How to Patent a Mobile App Idea in Basic Steps

The following are the essential stages to understanding how to patent an app idea. 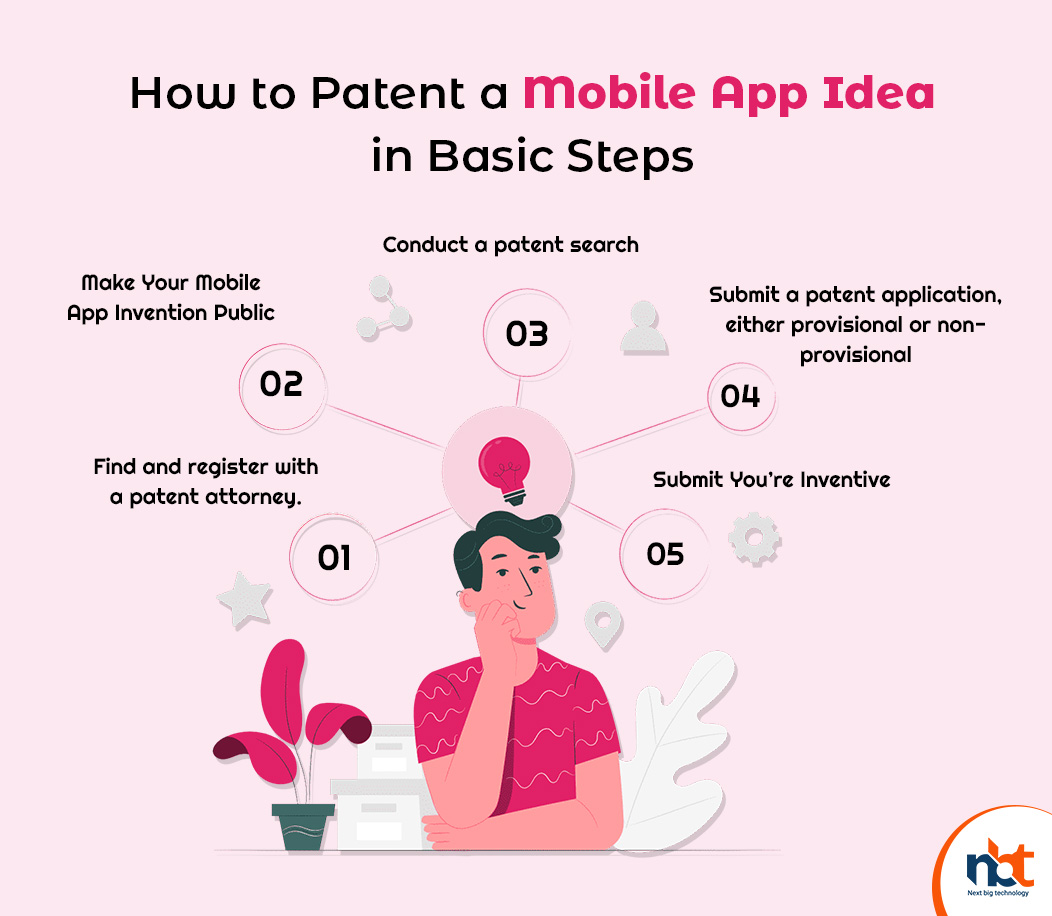 1. Find and register with a patent attorney.

You should counsel and hire a patent lawyer that specializes in software patenting if you want to offer a well-crafted top-notch patent and maximize the scopes of your patent application being chosen. He or she must have prior experience in this field.

Because it is a legal procedure, it may include litigation. So, rather than attempting to do it yourself, hire a professional. It is not advised that you hire the first lawyer you come across. Make a thorough investigation and find the greatest option that meets your budget.

Just because you have an app idea doesn’t mean you’ve finished your effort. You must bring the idea to life in order to prove its utility, and this is one of the requirements for obtaining a patent. Because the court will want adequate documentation of your invention before obtaining a patent against your app, you must ensure that the entire process is documented.

You may also create a prototype of your mobile app to evaluate its functionality. This will aid your lawyer in evaluating your app’s flowchart, as it is the app operations and capabilities that are patented, not the code. It can brilliantly assess different activities of your app in other industries and provide you with a new perspective on what other parts of your app are eligible for patenting.

Even if you studied well, a patent lawyer is recommended to do a global search for apps that are identical to yours or have the same flows or functionalities.

In this manner, you can avoid any unexpected breaches from other companies. It is preferable to spend some money and ensure that your patent has the broadest possible scope of approval.

4. Submit a patent application, either provisional or non-provisional.

You can file a provisional application without submitting a formal patent claim, declaration, or data disclosure statement. This application type has a few advantages:

Non-provisional applications allow you to file without making a claim on an application filed in the convention country or with no app reference in the procedure. It should be accompanied by a comprehensive claim as well as specifics. It must include a written description of the invention as well as a claim that legally characterizes the invention.

You must examine the following factors while deciding between a provisional and non-provisional application:

Non-provisional is the greatest option for you if your need is related to the second criterion mentioned above. If you only need the first, a provisional application will suffice.

This is the last step in the process of patenting a mobile app concept. After successfully completing the preceding stages and preparing a patent application, you must file it with the USPTO.

You should investigate it, despite the fact that it is a time-consuming operation that necessitates a lot of paperwork. You may require the following documents throughout this procedure:

What Should You Do If Your App Idea Has Already Been Patented?

You don’t have to give up if your patent search reveals that the idea has already been patented by someone else. Examine the patent carefully and think how you might set your app out from the competition. Just remember that you can always tweak and innovate your idea to make it better and new.

When Is It Necessary to Submit a Patent Application?

Patenting an app is now attributed to the person who files the patent against it, rather than the person who invented it first. This is the primary reason why entrepreneurs and business owners choose to seek a provisional patent before exposing critical information to the public.

Many patent attorneys may advise you to patent an app idea before pitching it to a potential investor. If you’ve signed a non-disclosure agreement, get ready to file as soon as possible.

How Much Does a Mobile App Patent Cost?

Non-provisional patents have a price range of $10000 to $15000. As a result, an administrative agency examines your patent application for several years to determine whether it is worthy of a patent.

How Long Does It Take to Get a Patent for a Mobile App?

Many times, applications are turned down and must be resubmitted. This back-and-forth procedure can last about 4-6 years depending on the circumstances.

You must now be certain that patenting an app concept will take time and effort. You must, however, patent your app if you believe in your idea and believe it has the potential to become an innovation. Although the method is somewhat crucial, it is far less time-consuming than dealing with clone apps that steal and violate your business concepts or face a patent infringement case.

Thanks for reading our post “How to Patent a Mobile App Idea”, please connect with us for any further inquiry. We are Next Big Technology, a leading web & Mobile Application Development Company. We build high-quality applications to full fill all your business needs.